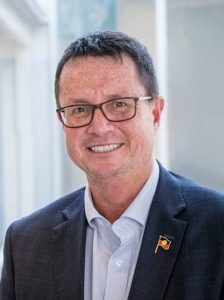 A medical college president has opened up about his near suicide attempt three decades ago, and the fellow intern who prevented it.

Professor Steve Robson, president of the Royal Australian and New Zealand College of Obstetricians and Gynaecologists (RANZCOG), says for too long shame and fear kept him silent about his mental health struggle as a junior doctor.

But now – inspired by the #CrazySocks4Docs movement – he is sharing his story in the hope it may encourage others in similar situations to seek help.

Writing in MJA Insight, Prof Robson describes his descent into depression halfway through his intern year at Rockhampton Hospital in 1988. He says he had an “all-pervasive” sense of failure after his work was rated barely adequate. Poor feedback from consultants and registrars, coupled with guilt over the death of a patient left him feeling there was “no way out”.

He took some medication from the hospital and went home to his small hospital unit, prepared to end his life.

But as he prepared to administer the intended fatal dose, he was interrupted by a knock on the door from an un-named fellow intern, who engaged him in conversation and prompted him to “step back from the brink”.

“Looking back, that person probably had an inkling that I was about to do something dramatic. That impromptu visit saved my life,” he writes.

Professor Robson says he confessed his near suicide plan to a GP who advised him not to disclose details of his mental health to anyone for the sake of his career as well as financial matters such as insurance.

“The episode left me with two key messages: [I] would never be appointed to a training program and seeking help was a sign of weakness, something to be ashamed of and hidden.”

Professor Robson says his decision to reveal his troubled past now is to show that mental health problems are nothing to be ashamed of or remain silent about.

“If a person who has reached the highest point in their specialty still feels ashamed of events 30 years ago, and is reluctant to admit it, how must those who are going through things and feeling disempowered now feel?” he says.

The candid self-disclosure has been met with an outpouring of support from doctors, including an extraordinary response from the previously anonymous colleague who staged the intervention.

Dr Tree emphasised that her intervention in 1988 had been planned rather than impromptu, and that other interns shared her concerns about Dr Robson’s depression in the face of  crippling work pressure and lack of support.

“We were all overwhelmed by the hours, the workload, the responsibility of being the one and only doctor on site overnight in the entire Base Hospital, under constant social pressure to NOT ask for help and to NOT call anyone overnight,” she writes.

She apologised for not offering Steve more support at the time, and noted that she and other interns had been sworn to keep silent about the incident.

Dr Tree said she had experienced several other medical colleagues attempt suicide and it was time to break the “cage of silence”. She hoped Professor Robson’s story could now be used as an example to inspire others to open up.

“I have also had male colleagues cry on my shoulder in the workplace, because the 1988-style masks are slipping, the “manbox” is changing, and even well-meant silence is not always constructive, positive or helpful.”