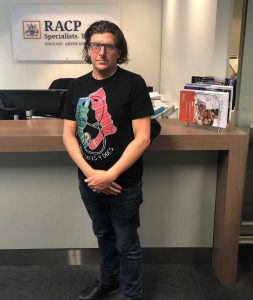 Victorian specialist Dr Geoff Toogood has been given one of AMA’s highest awards for his ‘crazy socks’ campaign for doctors’ mental health.

Dr Toogood, a cardiologist in Melbourne, was given the AMA President’s Award in recognition of his efforts to establish the first Friday in June as CrazySocks4Docs day – a day when doctors around the world are encouraged to share photos of their loud and mismatched socks on social media.

Presenting him with the award at the AMA National Conference in Brisbane, Federal AMA president Dr Tony Bartone said Dr Toogood had made an outstanding contribution in physician mental health by encouraging a more open and non-stigmatising workplace culture.

“Geoff’s message is that it is okay for doctors not to be okay, and that by talking openly about mental illness, depression, and anxiety, we can empower our colleagues to seek help, or offer assistance,” he said.

“Geoff speaks from a lived experience, and is a passionate and authentic advocate for the medical profession,” Dr Bartone told the conference.

“Geoff overcame significant mental health issues, with the support of his family, family GP, and other health providers.

“But on his return to work, he faced discrimination and unfounded speculation about the state of his mental health.

“As part of his recovery, he wore bright socks, and adopted a puppy. And, as anyone who has ever lived with a puppy knows, socks and pups are not a good mix.

“One day in 2016, his dog Sammy chewed one of his socks as he was on his way out the door to work.

“When Geoff grabbed another, non-matching sock and wore it to work, he became aware that his colleagues were laughing at him behind his back and whispering that he was ‘going crazy again’.

“A simple question or chat would have cleared up the matter.

“Geoff decided it was time to break down the stigma and get people talking about mental illness in the medical profession.

“So he made the first Friday in June #CrazySocks4Docs day, and encouraged members of the health profession to share photos of their odd, crazy socks on social media.

“#CrazySocks4Docs is now a global phenomenon, with doctors around the world donning odd socks.

Dr Bartone said surveys had shown Australian doctors and medical students were burnt-out, more likely to experience psychological distress and suicidal thoughts than the general community, and are drinking too much alcohol.

“We have lost too many of our colleagues in recent years to ignore our own health.

“Dr Geoff Toogood has led the way in raising awareness around the world of the need to support each other and talk openly about mental health.

“I commend him for his work, and am proud to present him with this Award.”