Why is healthy food so hard to buy in hospitals? 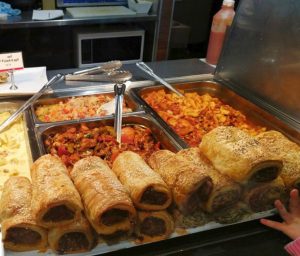 Hospitals should be setting an example on healthy diet but the chances of finding nutritious food in a public hospital are slim, according to findings from a recent study.

Cafes, shops and vending machines in NSW public health facilities are supposed to ensure that 75% of ‘every day’ food items fall into the five core food groups, and  restrict items high in saturated fat and sugar to 25% of food choices, according to State government policy introduced in 2017.

But a recent audit of 84 food outlets at two major public hospitals in western Sydney found most were not complying.

Only 1 of 14 food outlets (cafe or convenience store) and 23% of 70 vending machines in the hospitals met the healthy food benchmark, the study published in February in Nutrients found.

The state’s framework for food outlets in public health facilities aimed for a complete ban on sale of sugar-sweetened drinks by December 2017, and full compliance with other targets by December 2018.

But the study showed that to date, only one hospital has banned the sale of sugary drinks.

Portion sizes were also a problem, with almost half (48%) of meals in the ‘occasional food’ category exceeding sizes specified by the framework.

Many of the packaged foods and drinks available in hospitals had a “suboptimal nutrient profile”. And choosing healthy eating options was difficult because fewer than one in six carried a front of package health star rating.

Healthcare facilities should be leading the charge on healthy eating messages, according to researcher Carrie Tsai from the University of Sydney and her co-authors. Hospitals and other healthcare institutions could have a major influence on dietary patterns given they treat 6 million patients a year and have over 360,000 staff employed, they emphasised.

“Our findings suggest that a substantial amount of discretionary products available in Australian hospitals current exceed government recommendations. This was particularly alarming for sugary drinks, over-consumption of which is linked to dental decay, obesity and type 2 diabetes,” they said.

Based on their findings, they suggested that a vendors’ guide be developed listing healthy alternatives to commonly sold food items, noting the NSW Government has already developed a similar list for schools.

And making Health Star Ratings mandatory on packaged food mandatory would also help, they suggested.
A spokeswoman for the NSW Ministry of Health said the study was carried out in June-July 2017, around the same time as the launch of the Framework.

“This study is not a measure of compliance with the new Framework but does provide some insight into the changes that will need to be made to meet the Framework,” she told the limbic.

Local Health Districts were partnering with the vending machine and cafe owners to achieve compliance by the December 2018 deadline, she added.