Trial will inform choice between mAbs in severe asthma 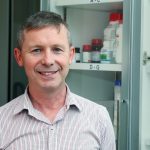 Respiratory physicians in NSW are seeking research collaborators to take part in a head to head trial of mepolizumab and omalizumab in patients with severe allergic and eosinophilic asthma.

Professor Peter Wark, a senior respiratory specialist at John Hunter Hospital and the University of Newcastle, is hoping to recruit 160 patient across Australia and New Zealand for the randomised “choosebetweenamab” trial that will compare the new anti-IL5 targeted biologic against the older IgE blocking mab that has been used in allergic asthma for more than 15 years.

Professor Wark said the trial is intended to answer the real-life dilemma of which drug would best suit which patient with severe allergic asthma, given the overlap between atopic and eosinophilic asthma.

“There’s a group of patients who are candidates for both drugs, and a clinician could quite reasonably choose one or other as the first line of treatment,” he said.

“Previous trials have clearly demonstrated efficacy of these therapies yet they don’t discriminate between which drug is best for those who qualify for both. We’re hoping for greater clarity in choosing the right treatment for the right person, first time around.”

Professor Wark told the limbic there was a perception that an anti-IL5 class drug may be the better choice for some patients but there have been few trials comparing different classes of drugs, and much of the evidence of omalizumab was quite old and from a time when it wasn’t used in the most severe of asthma.

Another challenge for physicians is that the drugs take some time to work, with the assessment period lasting up to six months. Under present PBS guidelines there’s also a waiting period of six months before a patient can be switched to another treatment.

“We’re embedding our trial very much into clinical practice, with the only difference being that the choice of drug is randomised,” he said

As in real life, patients will have to meet PBS eligibility criteria for severe asthma treatment. But if a patient fails on one treatment, they can then be switched to the other agent with no waiting period.

Patients will also be phenotyped, to clarify whether subgroups may respond better to one drug or another.

“There’s some differences in administering the drugs, but that’s not where clinicians should be making the choice. We have to predict which drug will work best for a particular patient.

“Over the next three years we’re hoping to recruit as many patients as we can from as many sites as possible across Australia and New Zealand. We’ve lined up a large number of collaborators but will be coordinating the trial from the Hunter,” said Professor Wark.

The trial is sponsored by GSK, makers of mepoluizumab (Nucala).