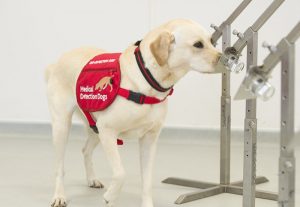 Sniffer dogs are able to detect the presence of Pseudomonas aeruginosa at very low levels, opening up the possibility for their use in screening and early antibiotic treatment to prevent lung colonisation in cystic fibrosis patients, UK researchers say.

In laboratory experiments carried out at Imperial College, London Bio Detection dogs trained by the charity Medical Detection Dogs demonstrated a high level of accuracy in differentiating  in vitro samples of Pseudomonas from other pathogens that cause chronic infections in people with CF.

In the trial, the dogs were trained with a reward system to stop and sit down when presented with low levels of  P. aeruginosa in liquid samples derived from sputum of CF patients.

Once trained, dogs were tested by being presented with random sequences of Pseudomonas-positive cultured samples, other cultured bacterial controls or sterile liquid, in a double-blind testing scenario.

When differentiating P. aeruginosa from other bacteria familiar to the dogs, the detection dogs had a mean sensitivity of 94.2% with a specificity of 98.5%. For P. aeruginosa versus previously unencountered bacteria, two of the three dogs maintaining sensitivity at above 90%.

When tested at dilutions of 1:1,000, sensitivity (93.8%) and specificity (94.9%) were consistently maintained; and similarly when presented with mixed, multi-organism cultures, the dogs still correctly identified P. aeruginosa with a sensitivity of 86.5% and a specificity of 84.1%.

Writing in the European Respiratory Journal, the study authors say their findings suggest that dogs may offer a more affordable and sensitive screening approach for Pseudomonas lower airway infection in people with CF.

Study co-investigator Professor Jane Davies, from Imperial College London, said the findings were promising given that advanced technology to detect P. aeruginosa, for example in breath, had proved difficult so far.

“People with CF could ultimately monitor their lung infections from home by sending in samples for the dogs to check,” she suggested.

The successful training of the dogs on cultured samples would be used as the foundation for testing patient samples directly, Professor Davies added.

Dr Janet Allen, Director of Strategic Innovation at the Cystic Fibrosis Trust, which sponsored the research, said a quick and easy way of detecting Pseudomonas would make a big difference to people with cystic fibrosis and their families.

“Once it takes hold, [Pseudomonas] requires strong antibiotics that can require hospital stays and often carry significant side effects. Some antibiotic-resistant strains can even cause permanent, life-shortening lung damage.

“We’re delighted to fund the next steps of this work,” she said.