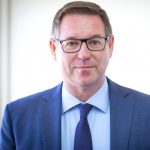 Lung Foundation Australia’s incoming boss Mark Brooke says removing the stigma around lung cancer and strengthening ties with clinicians will be top priorities under his leadership.

Mr Brooke, who was previously CEO of Asthma Australia and HeartKids, takes the reins of the national charity at a pivotal time as the organisation begins work on Australia’s very first national strategic plan for lung conditions, funded by the federal government.

The document will be a “seminal piece of work that will guide clinicians and patients for a number of years,” according to Mr Brooke, who says he is excited about returning to the world of respiratory health after leading Asthma Australia between 2010-16.

Moving forward, he says key areas for advocacy will include lung cancer, which he describes as an under-recognised and underfunded disease despite its prevalence, accounting for 9% of new cancer cases diagnosed in 2017.

“Lung cancer suffers from a significant stigma which needs to be corrected. I think that does cross into how the government is making decisions about investment and research so I think there is a significant piece of advocacy there.”

He also wants to continue to build on LFA’s relationship with clinicians and researchers.

“Our relationship with TSANZ I hope will strengthen over the next few years because it is at the intersection between patient advocacy and clinical advocacy that we see true growth. It’s really important to me as the incoming CEO that we have a very strong partnership not just with the clinical and research community but with the patients and that LFA creates that bridge.”

Another focus will be the crossover between asthma and COPD.

“That’s largely an area which is poorly defined and poorly understood so there is a significant amount of work we need to do in that space,” says Mr Brooke.

LFA will continue its push for government funding for new lung disease registries, and for the evidence that they yield to be translated into clinical practice in primary and tertiary care.

“I think consumers are looking for those learnings being applied in real world practice,” he says.

“[It’s important to] fund registries in such a way that they build that volume of knowledge so we understand how new resources [and] new clinical guidelines are making a difference. That longitudinal approach is something where respiratory medicine has led the way, but there is a need to do more in that space.”

Mr Brooke also wants to shine a light on specific populations that face additional disadvantage in the area of lung health, such as Aboriginal and Torres Strait Islanders, newly arrived migrant groups and other groups with low health literacy.

“We want to understand their needs and be a passionate advocate.”

He says he is excited to be working with board with strong clinical and consumer representation.

“There is a lot of really encouraging and positive work happening in and around lung health … I am walking into an organisation that is on the up.”

“The Board has no doubt that Mark will lead the organisation very successfully to achieve our goals of further growth in community awareness, funding and policy support. I look forward to further success for Lung Foundation Australia under his leadership,” she said.

She also thanked outgoing CEO Heather Allan, noting she left a legacy that included “leading the development of our world class evidence-based COPD-X Clinical Guidelines, establishing the Lungs in Action community based exercise program, lifting and strengthening the organisation’s role in advocacy and building our profile as the go-to organisation for lung disease patients, clinicians and the community”.

“Heather played a critical role in the growth and success of the organisation. She leaves Lung Foundation Australia in a very strong position for future growth and we sincerely thank her for her contribution and leadership,” Professor Jenkins said.