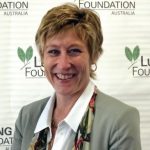 According to an announcement by LFA, Heather will be stepping down in July, to join her husband who is on sabbatical in the UK and US.

“I have thoroughly enjoyed over 13 years with the Lung Foundation and have been privileged to be part of the tremendous growth of the organisation, both in terms of impact and credibility,” Ms Allan said in a statement.

“This has largely been due to the generous contributions and support of our many community and clinical volunteers, as well as donors, industry partners and, of course, our dedicated staff.”

“I am proud of what we have all achieved together and feel that it is time for new leadership to take the Lung Foundation to the next stage of its life,” she said.

In its most recent report, the LFA noted it had increased research funding by more than 50% and advocated on lung health issues such as Medicare funding for pulmonary rehab, PBS listings for COPD medicines and funding for treatments and research into low survival cancers such as lung cancer. The LFA also organised the first Lung Health Round Table with the Department of Health.

“A national search is currently underway to find the next Chief Executive and it is hoped that the new CEO will be in place prior to Heather’s departure,” the LFA said.