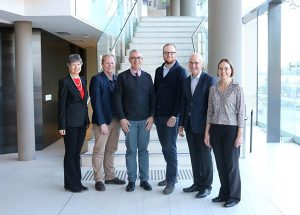 Cough research by a team of scientists and clinicians from Queensland has taken out one of Australia’s top science awards  – the Eureka Prize – for their pivotal work in reducing transmission of pathogen in cystic fibrosis.

Using a purpose-built cough laboratory and analysing aerosols, the team uncovered the process by which pathogens causing airway infections are transmitted between CF patients.

Professor Mark Walker, from University of Queensland’s School of Chemistry and Molecular Biosciences and Director of the Australian Infectious Diseases Research Centre, said he was excited about the real-world impacts of this research, such as re-designing CF wards and clinics.

“For example, at Children’s Health Queensland, the largest paediatric CF service in Australia, the team’s research has led to patients being housed in separate outpatient rooms, reducing the potential for the transmission of infectious agents,” he said.

“Ultimately this work will lead to a reduction in infection rates amongst CF patient groups, greatly improving lives and tackling the $70 million per annum direct costs of CF in Australia.

The Eureka Prizes, presented by the Australian Museum, are the country’s most comprehensive national science awards.