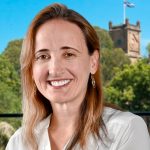 Dr Richards, who leads Royal Prince Alfred’s rheumatology department, was appointed to the unique position for Sydney Local Health District in February this year after being the only Australian invited to Stanford University’s inaugural chief medical wellness course in California last year.

Now three months into the job, overseeing 14,000 people working across four hospitals, she feels a lot of progress has been made while admitting “it’s been very challenging”.

Her task is to help drive cultural and systemic change, reducing stress and burnout among both junior and senior doctors, driving a new program called MDOK, which has already begun rolling out.

“One of the first things we realised was there wasn’t a widespread understanding of the severity of (the problem) – that over 50% of our staff are currently suffering burnout levels,” she told the limbic. And much of that lack of recognition came from people in the eye of the storm.

“People at an individual level are very bad at recognising the symptoms of burnout,” she said. “There’s a lack of recognition of symptoms in themselves and in their colleagues”.

Even if a problem is identified, there was a tendency to ignore or cover it up and an ingrained sense that clinicians need to put everyone’s needs before their own.

According to Dr Richards, “every specialty has its own issues” and what adversely affects junior doctors is different to what impacts senior doctors or emergency staff.

“There is no one solution that’s going to fix all this and we need a very localised, individualised approach for each of the different areas,” she said.

“The broader issues we’re starting to hear from senior staff we’re dividing into areas of culture, the systems that are affecting their efficiency and ability to do their jobs, as well as personal resilience/self-care”. One common issue across all specialties affecting practice efficiency was the lack of administrative support and the increasing burden of paperwork.

There was also “a sense of a loss of autonomy, flexibility and control over their world and a sense that it’s unchangeable,” she said. “Things have been the same for 50 years and they don’t see how that can change. A loss of hope is driving the burnout”.

Another recurrent theme was of senior staff being put into leadership positions with without any leadership training, which then had “a wide influence over their department and junior staff.”

Other senior staff said they felt “siloed”, she said. “They work in huge organisations and never see their colleagues and lose opportunities to debrief or share ideas and get a sense of community”.

As a result several projects are being planned, starting with an internal leadership training program beginning with department heads.

Another is an initiative originally aimed at junior consultants called the “Young Boss Club”. However its popularity has led to a pretty loose definition of “young”.

“The intention was to have consultants in their first five years of training but demand has been so great they’ve expanded out to the first 20 years training”.

Once a month they hold a “half-social” event bringing in senior people with 40 or 50 years experience, “sharing knowledge which can’t be found in any textbook,” she said.

Many senior clinicians also bemoaned the loss of the staff lounge from 30 or 40 years ago and the sense of community that went with it, she said, so they were designing a space to bring that community back to the organisation.

While Dr Richards is the first such Chief Medical Wellness Officer, she’s hoping for many more with strong demand and interest.

Three more Australians will be attending the Stanford course in July to help build what she hopes will be “an army” of specialists dealing with clinician mental health.