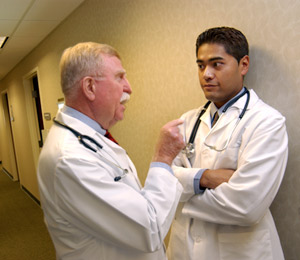 “Low grade” microaggressions between hospital workers and unprofessional behaviour like yelling or eye-rolling are having outsized impacts on staff morale, researchers are arguing.

While serious bullying and sexual harassment are well documented problems in hospitals, there are calls for more to be done to stamp out behaviours which often go unreported at the lower end of the spectrum.

This can include doctors being unapproachable or pedantic, refusing to make eye contact or repeatedly interrupting when others are speaking.

But while these behaviours are all considered unprofessional, survey results show many have been normalised across Australian health services, according to a study in BMC Health Services Research.

The examples came from the 2017-18 Longitudinal Investigation of Negative Behaviours (LION) survey, which asked hospital workers in three Australian states what unprofessional behaviour they had experienced at work.

Sexism and harassment remained key issues, with some respondents even describing examples of doctors sharing pornographic images in the workplace.

However, a major source of complaints centred around what the authors termed lower grade negative behaviours or “incivility”, such as “working with headphones on”, general unfriendliness or “failing to greet colleagues”.

Others included doctors raising their voices at nurses for no reason and rudeness such as sarcasm or sighing when a nurse began talking.

“People coming into work in a bad mood,” was one complaint in the survey. “Or people being passive aggressive about things not being done or not being done right…”

Another respondent said: “I regularly experienced aggressive “over-ruling” and “eye-rolling” type behaviour when expressing clinical concerns about patient conditions in the ICU.

“It is very detrimental to confidence in reporting concerns when you are met with an offhand or sarcastic response. I feel it creates an environment where you are reluctant to report concerns for fear of being embarrassed.”

Operating theatres were identified as common hotspots for rudeness, while nurses were also accused of being “very rude and aggressive” when asked to fill out paperwork while under stress.

The study authors, from Australian Institute of Health Innovation at Sydney’s Macquarie University, said this was particularly common when multiple staff with different roles and varying levels of expertise were expected to work together.

“Professional stressors related to surgical processes and procedures appear to activate or elicit authoritarian and hierarchical modes of interacting between inter-professional groups,” they wrote.

“This may be associated with staff lapsing into verbal or physical unprofessional behaviours.”

They suggested additional training in professionalism for all hospital staff, adding organisations’ HR policies should also be tightened up to clarify appropriate behaviour.

On top of that, work should be done to increase communication and respect between different professional groups inside hospitals, the authors said.