School children are making a song and dance about superbugs 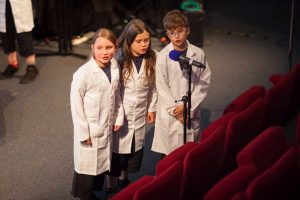 How to get the message about antibiotic resistance across to kids who would rather be looking at their mobile phones?

In the UK, microbiologists have teamed up with theatrical producers and schools to create superbugs, the musical

Or rather, the actual name is The Mould That Changed The World.

Dr Meghan Perry, an infectious diseases physician and research scientist at the University of Edinburgh (and a musician herself) developed the idea of an antibiotic resistance-themed musical with support from the British Society for Antimicrobial Chemotherapy (BSAC).

The musical’s narrative begins with Alexander Fleming’s discovery of penicillin in 1928. It shows how these death-defying worldly-wonder antibiotic drugs have saved lives for the last 90 years. But bacterial resistance is growing, doomsday approaches.What better way to fight back against superbugs than with a musical of epic proportions? The musical’s finale is in the present day as world leaders discuss the need for decisive action.

Teaming up with school musical theatre producers Charades Musicals, premiere performances of the musical  – performed by local school children – have taken place at the National Museum of Scotland and the London Science Museum in recent weeks.

And Dr Perry is now on track to launch a professional production of the musical at this year’s Edinburgh Fringe Festival. This high-profile stage will be the springboard for offering the musical as a free project for school theatre groups, according to Dr Parry.

“The important message of the rise of antibiotic resistance and the fragile future of antibiotics needs to rapidly reach all corners of society,” she says.

“Performing a musical is a truly interactive experience that will immerse a child in the evocative story of antibiotics and have a profound effect on their knowledge and understanding of the subject. A child’s involvement in a musical impacts the entire school community and three generations; their siblings, parents and grandparents.”

The performances take place close to the 90th anniversary of penicillin’s discovery by Alexander Fleming, a former Rector of Edinburgh University.

Video tutorials, music, scripts, and lesson plans will be made available online for free to schools that registe