Tributes paid to Australian pioneer who made autoimmunity a clinical science 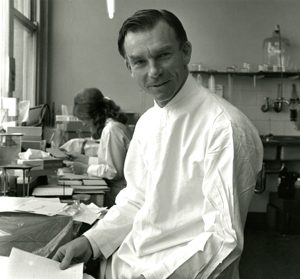 The Walter and Eliza Hall Institute of Medical Research in Melbourne has paid tribute to an Australian pioneer in autoimmune disease research, Professor Ian Mackay.

Professor Mackay, who died at the age of 98 on 24 March, was an immunologist and clinician whose research contributed to the development of immunosuppressive treatments for autoimmune diseases including, lupus, rheumatoid arthritis and Sjögren’s syndrome, therapies.

A graduate of the University of Melbourne, he started working at the Walter and Eliza Hall Institute in the 1950s under director Sir Frank Macfarlane Burnet.

At the time, the notion that some diseases might be caused by a misdirected autoimmune attack, was controversial  and even derided.

Professor Mackay applied his experience in hepatology to study hepatitis – liver inflammation – and with colleagues developed a blood test that revealed that some cases did indeed have an ‘autoimmune’ component.

After his initial breakthrough work in autoimmune hepatitis, he co-authored the landmark work Mackay and Burnet’s Autoimmune Diseases in 1963, which was said to have marked the beginning of autoimmunity as a clinical science.

Their hypothesis was based on clonal selection theory and the emergence of “forbidden clones”, due to somatic mutations. Professor McKay contributed the clinical chapters that described

Professor Mackay spent the rest of his career working on autoimmune diseases at the Institute and the Royal Melbourne Hospital, where he was head of the Clinical Research Unit until his retirement in 1987,

“Ian’s research changed the understanding of the causes of autoimmune diseases, making an enormous impact on how we study them and saving and improving countless lives through better treatments,” said WEHI director Professor Doug Hilton AO

. “We will remember Ian’s incisive mind, exacting standards and laser like focus on solving major clinical problems. He was a pioneer of the Institute’s commitment to translational research and shaped the Institute we have today. He will be greatly missed by his colleagues and friends.”