“We show exactly where the air is going”: the smart lung function test 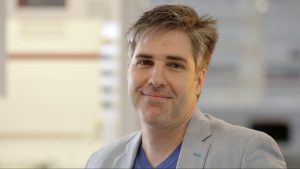 Presented at the ATS 2018 International Conference and with FDA approval pending, 4Dx will have application in both early detection of disease and management of disease progression.

4Dx chairman and CEO Andreas Fouras, an Adjunct Professor at Monash University and former research director of its Laboratory for Dynamic Imaging, told the limbic the technology provides much richer information than is currently available.

“I get little to no argument from respiratory physicians that the current measurements that they have don’t really inform them. They feel like the lung is hidden behind a wall inside a black box and they don’t really get good access to knowing what is happening inside a patient’s lungs.”

“We really provide very rich information. We can show exactly where the air is going and where the air is not going with a level of clarity and detail that nothing else can provide. And we can do that very safely and very inexpensively.”

Images are taken during a few breaths utilising existing X-ray fluoroscopes and are processed through 4Dx software to create airflow and ventilation reports.

Professor Fouras presented to the meeting a pre-clinical model of diaphragmatic hernia demonstrating that healthy regions of the lungs could compensate for diseased regions to hide functional deficits.

“Lung compensation is the reason that the global measures that are in use today are ineffective in detecting pulmonary disease. Pathological conditions must be advanced enough to be measurable on a global level.”

Professor Fouras told the limbic that as well as providing early understanding of what was happening in someone’s lungs, for example in COPD, 4Dx could also provide the information to guide targeted interventions such as lobectomies, valves or springs.

“So knowing where to place it or whether or not to place it in a patient really requires a lot of understanding of what is happening inside those patients’ lungs. We provide exactly that kind of information.”

4DX was currently being explored further in a range of conditions alongside the gold standards of spirometry, X-ray and CT at institutions in North America, Australia, Asia and Europe.

Professor Fouras said he was expecting it to be available in US clinics next year where there are 70 million lung diagnostic procedures per year.

“It takes time to change a market that big so it will be a significant piece of work building the evidence base and gaining the trust of physician and patient communities. I think it will take another couple of years after that to really get traction.”

“We’ve had a really great meeting; it’s been an even more positive response than we expected. Despite the known and sensible conservatism of the clinical community, they have reached out to a brand new technology and a technology from Australia,” he added.