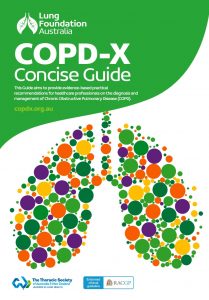 Stronger evidence for triple therapy in COPD patients with exacerbations has driven one of the changes in the latest update of the Lung Foundation’s COPD-X Concise Guide.

The Guide, endorsed by the TSANZ and the RACGP, says the combination of ICS / LABA / LAMA results in a lower rate of moderate or severe COPD exacerbations, and better lung function and health-related quality of life than dual therapies.

Triple therapy may be most useful for patients with repeated exacerbations, it says.

Co-chair of the COPD-X Guidelines Committee Professor Ian Yang told the limbic the triple therapy recommendation for patients with severe symptoms and frequent exacerbations was in line with the PBS.

“PBS made a change earlier this year. Previously triple therapy and any inhaled steroids needed the frequent exacerbations but they also had a lung function criteria. It used to be FEV1 <50% predicted. But because more recent studies have shown the effect is really across the board, the PBS, based on evidence, has decided to remove that lung function criteria.”

Other changes in the COPD-X Concise Guide include:

Professor Yang said the value of pulmonary rehabilitation was “proven beyond a doubt”.

“It’s at a prime time when people are most vulnerable and they could gain the most from pulmonary rehabilitation,” he said.

The redesigned Guide also includes a summary of the latest evidence, clinical practice tips, and updated versions of the Stepwise Management of Stable COPD and Managing a COPD Exacerbation Checklist.