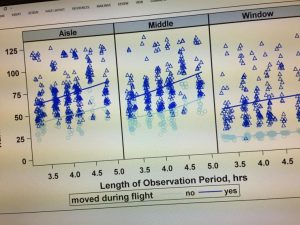 An airline passenger with influenza or other respiratory infection will not transmit infection to passengers seated more than two seats away laterally or one row in front or back, US research suggests.

To model the likely transmission patterns of in-flight respiratory infections, researchers made five East-West round trips in the US recording movements of passengers and crew.

They collected air samples and obtained surface samples from specific areas of the passenger cabin most likely to harbour infectious ‘fomites’.

Publishing their modelling in Proceedings of the National Academy of Sciences, the researchers concluded that direct transmission of respiratory tract infections was unlikely to fellow passengers more than one metre away.

“This is more conservative than current public health guidance, calling for surveillance of passengers within two rows of an infectious passenger,” they noted.

They acknowledged that respiratory infections could also be transmitted indirectly through contact with an infected surface if a sick passenger coughed into their hand, and later touched a lavatory handle, overhead bin handle, tray tables and, seat belts.

“Passengers and flight crews can eliminate this risk of indirect transmission by exercising hand hygiene and keeping their hands away from their nose and eyes,” the researchers said.

But the researchers also pointed to airline cabin crew as being high risk transmitters due to their movement throughout the aircraft.

“Thus, it is imperative that flight attendants not fly when they are ill,” they said.   They cautioned that their findings only applied to medium distance flights of several hours duration and could not be extrapolated to long haul flights during which patients could move around the aircraft and make more contacts with other passengers.

The study was funded in part by Boeing.