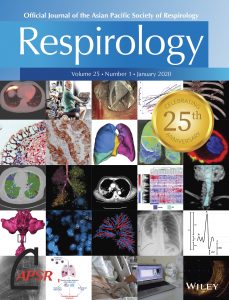 Respirology, the official journal of the Asian Pacific Society of Respirology, is celebrating its 25th anniversary in its January 2020 issue.

One of its former Editors-in-Chief Professor Philip Thompson (2001-2008) wrote in the issue that the founding of the journal in 1996 was “a bold and brave step” for the then fledgling APSR.

The journal, with an impact factor of 4.756, currently ranks an impressive 11th of 63 international journals in the field of respiratory medicine.

It is the preferred English language journal for the Japanese Respiratory Society, Taiwanese Society of Pulmonology and Critical Care Medicine and the TSANZ. It is also an official journal of the World Association of Bronchology and Interventional Pulmonology.

Professor Thompson said constant innovation, along with the quality of scientific articles, Review articles and series, Editorials and Guest articles, has been the key to success.

One of the current Editors-in-Chief Professor Paul Reynolds highlighted some of the major changes in the past 25 years which have been chronicled in the journal.

“The explosion in our knowledge of biology in health and disease has been extraordinary, driving a host of new therapies since those early years—monoclonal antibodies for various conditions including asthma, treatments for idiopathic pulmonary fibrosis (IPF) and pulmonary arterial hypertension (PAH), and targeted therapies and immunotherapies for lung cancer just to name a few.”

“On the negative side, the emergence of drug‐resistant infections including extensively resistant tuberculosis, the re‐emergence of silicosis, the new challenge of e‐cigarette toxicity and the ever‐increasing problems of pollution and the impact of climate change on respiratory health are just some of the reminders of the never‐ending need for scientific advancement.”