Professor Helen Reddel: eosinophils of less use for guiding treatment in mild asthma 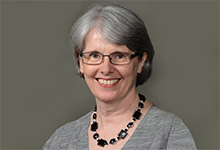 Blood eosinophils have less of a role in predicting exacerbations or guiding treatment in mild asthma than in severe asthma, according to an analysis from the multinational Novel START study.

Blood eosinophils, FeNO or a composite of both measures were investigated for their utility in predicting outcomes and response to treatment over 12 months.

The study found patients with higher baseline blood eosinophils (≥0·15 ×109/L) were almost three times as likely to have ever been hospitalised with an asthma exacerbation than those with lower blood eosinophils.

However, the benefits of as­ needed budesonide-formoterol compared with as-­needed salbutamol for exacerbations and severe exacerbations were not predicted by the baseline blood eosinophils.

Elevated FeNO was not a prognostic biomarker for asthma exacerbations in any treatment group and did not predict response to treatment.

Co-investigator of the study Professor Helen Reddel, from the University of Sydney’s Woolcock Institute of Medical Research, told the limbic the most important finding was that patients with mild asthma didn’t need inflammatory phenotyping at baseline before being considered for treatment with as-needed budesonide-formoterol.

She said this could be because eosinophilic markers vary over time, but also because not all exacerbations were eosinophilic.

“Exacerbations can be primarily bronchoconstriction – without an increase in eosinophils. What we think is that it is then the formoterol component of the combination inhaler that is benefiting those patients.”

The findings on as-needed salbutamol were of less practical relevance given international recommendations against reliever-only treatment of asthma, she said.

“And what it shows is that for people with mild asthma who were just getting the SABA for 12 months, the higher their baseline eosinophils, the more likely they were to have an exacerbation in the next year.”

“However we’re not recommending anyone should be treated with salbutamol alone so it doesn’t hugely change things. This contrasts with the utility of blood eosinophils in guiding treatment of severe asthma.”

An accompanying Comment in The Lancet Respiratory confirmed the study did not offer any support for the use of FeNO and blood eosinophil counts for guiding treatment with ICS combined with formoterol in patients with mild asthma.

However more research was required including biomarkers that were not related to  type-2 inflammation.