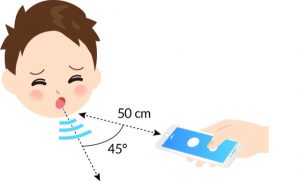 Cough audio streams were recorded on iPhone 6 phones held 25-50 cm away from the patient’s mouth, with the microphone angled at 45 degrees to avoid air hitting the microphone

An Australian smartphone app has been shown to distinguish between the cough sounds in children with various respiratory disorders.

The app was able to diagnose asthma, croup, pneumonia, lower respiratory tract disease and bronchiolitis with 81 – 97% accuracy in a study of 585 children recruited from two hospitals in WA.

The app was used to categorise the coughs of children, aged 29 days to 12 years, with the additional input of parent-reported symptoms. The findings were compared to a diagnosis reached by a panel of paediatricians with access to usual clinical data including imaging.

“The algorithm’s performance for RAD was excellent (PPA 97%, NPA 91%) and it is significant that the analyser was able to diagnose RAD at a high-performance level without the need for bronchodilator-response testing,” the study said.

Dr Paul Porter, from Curtin University, said even experienced doctors can find it difficult to differentiate between respiratory disorders in children.

“As the tool does not rely on clinical investigations, it can be used by health care providers of all levels of training and expertise. However, we would advise that where possible the tool should be used in conjunction with a clinician to maximise the clinical accuracy.”

It might, for example, could be a useful tool for remote families – removing the need for a clinical examination and allowing treatments to begin sooner.

“It’s use in different settings such as hospitals, ambulatory care, community and telehealth deserves evaluation,” the study concluded.