Obesity leads to fat deposition in the airways 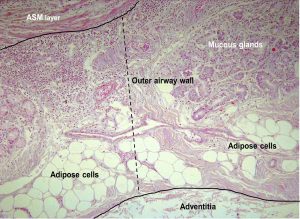 adipose tissue in the airways

Fatty airways could be contributing to problems with respiratory function in overweight and obese people, according to new research led by a WA team.

A study of cross-sectional tissues samples from postmortem lungs has demonstrated adipose tissue accumulates within the airway wall.

Samples from 1,373 airways from 52 lungs showed the fatty tissue was predominately in the outer wall of medium to large sized airways and seldom observed in small airways.

Adipose tissue was positively correlated with BMI in all three case groups.

Only BMI and male gender were found to be independently related to the area of airway adipose tissue.

The study, published in the European Respiratory Journal, provides the first evidence that fat accumulates in the lungs of overweight and obese people.

Previously, the increased prevalence and severity of asthma in people with obesity had been attributed to reduced lung volume due to thoracic compression or an inflammatory effect from adipose tissue.

“These results support a new mechanism of increased airway wall thickness associated with increased BMI which may contribute to excessive airway narrowing and exacerbate symptoms in patients with existing disease,” the study said.

Senior author on the study Associate Professor Peter Noble, from the University of Western Australia, told the limbic the mechanism for fat deposition in the airways and its implications needs further study.

However he speculated that fat might accumulate more easily in the medium to large airways than smaller airways due to the loose connective tissue between the alveoli and the larger airways.

Further research was also needed to determine if and how the volume of fatty tissue in the airways contributes to asthma severity and whether the effect can be reversed by weight loss therapy.

“Our immediate plans are to use sophisticated mathematical models to predict the effect of airway-associated fat on lung function.”

He said the unpleasant idea of fat accumulating around the airways might provide added incentive for weight control in people with conditions such as asthma.

“We support current health recommendations of eating well and exercising to obtain a healthy weight,” he said.

“It is also worth noting that overweight individuals can present with symptoms that may appear consistent with asthma leading to misdiagnosis. Understanding all the mechanisms which promote breathing difficulties in overweight individuals will be helpful for physicians when it comes time to prescribe treatment.