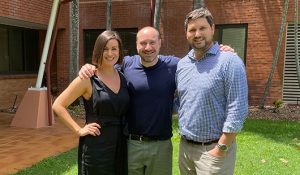 Doctors in Queensland have successfully treated a life-threatening P. aeruginosa infection in a post–lung transplant patient with cystic fibrosis by using used plasmapheresis to eliminate inhibitory IgG2 antibodies that were blocking the effects of antibiotics.

His treating doctors recognised the situation as similar to some patients with non-CF bronchiectasis who are chronically colonised with P. aeruginosa. These patients have high titres of IgG2 antibodies specific for the O-antigen of lipopolysaccharides (LPSs), which rather than having a bactericidal effect, impair serum-mediated killing of the infecting P. aeruginosa.

“In Jordan’s case, the bacteria was resistant to all forms of conventional therapy we were trying, and he was rapidly deteriorating, so I knew we needed a different treatment option fast,” said Professor Dan Chambers, Queensland Lung Transplant Service’s Head of Research.

Working with researchers at UQ’s Diamantina Institute, they identified that Jordan had P. aeruginosa infection that expressed O-antigen of LPSs and serum containing high titres of the inhibitory IgG2.

They also noted that pooled healthy control serum was able to kill all P. aeruginosa isolates from the patient.

They then treated him with five cycles of plasmapheresis followed by a single dose of IV immunoglobulin, and IV ceftazidime was continued for six weeks. Post-plasmapheresis, inhibitory antibody levels halved and serum no longer protected P. aeruginosa from HCS killing.

“The patient recovered with no further infective complications and excellent allograft function (FEV1 3.4 litres; 73% of predicted value),” they wrote in the Journal of Heart and Lung Transplantation.

Professor Chambers said the discovery was likely to have broader implications for managing serious and life-threatening infections in many other transplant patients.

“Jordan’s remarkable recovery gives hope to those living with cystic fibrosis and other chronic lung diseases,” he said

UQ Diamantina Institute researcher Dr Timothy Wells said the inhibitory antibodies found in Jordan’s case could be present in up to 40% of patients with the worst type of superbug infections.

“Fortunately, our research allowed us to identify this, with this innovative treatment now providing scope for other patients including those who may have been too sick to undergo a lung transplant before,” he said.