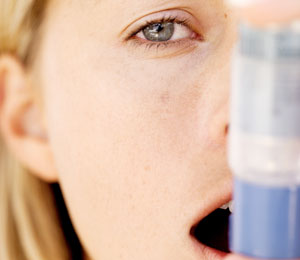 Tailoring of asthma therapy based on FeNO (fractional exhaled nitric oxide) or sputum eosinophils has been shown to be effective in decreasing asthma exacerbations in adults.

However an Australian-led systematic review and meta-analysis of the evidence for the use of the eosinophilic markers found they made no difference to daily symptom scores.

While some have advocated FeNO measurement as a simple non-invasive method for diagnosing eosinophilic asthma and for guiding the stepping-up and -down of inhaled corticosteroids, Queensland researchers say the evidence just isn’t in yet.

Their review identified 16 publications related to FeNO and six for sputum eosinophils with respect to asthma-related outcomes in children and adults.

“The exacerbation rate in the FeNO-strategy group was significantly lower than controls in the adult studies,” said the review authors, led by Dr Helen Petsky, School of Nursing and Midwifery, Griffith University and Menzies Health Institute Queensland, Brisbane.

However there was no significant difference between groups in the paediatric data.

Symptom scores did not significantly differ between groups on the basis of FeNO levels or sputum eosinophils.

“Likewise, for the outcome of asthma QoL scores, there were no significant group differences for the FeNO-based studies in adults and children.”

There was insufficient data in the trials to evaluate other secondary outcomes such as FEV1, airway hyperresponsiveness or rescue beta-agonist use.

The researchers concluded there was insufficient evidence to advocate for the routine use of markers of eosinophilic inflammation in asthma – despite their popularity.

“While these new data are somewhat supportive of authors who previously advocated using FeNO levels to tailor medications, we do not believe there is currently sufficient evidence to universally use FeNO to monitor airway inflammation recommended by others.”

“Also, currently, there is no evidence-based algorithm on how to adjust treatment based on FeNO levels (or indeed to sputum eosinophil levels) and the various guidelines (such as GINA, BTS, NAC) differ on when and how to step up and down asthma therapies.”

Use of the markers would also introduce significant costs, the study said.

The researchers called for more randomised controlled trials to include stratification including high versus low doses of ICS and eosinophilic versus non-eosinophilic asthma.