Could FOT be the next home monitoring tool for COPD? 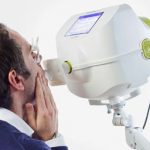 Home monitoring of COPD may benefit from the use of the forced oscillation technique (FOT) to measure lung mechanics during tidal breathing.

In a study of 16 patients with COPD, daily FOT parameters were compared with a record of daily symptoms using the COPD Assessment Test (CAT) and weekly quality of life as measured by the St. George’s Respiratory Questionnaire (SGRQ).

There were 37 acute exacerbations recorded during the nine-month study period.

Dr Zimmerman, a finalist in the Ann Woolcock New Investigator Award, said variability of inspiratory reactance was found to be significantly related to both CAT and SGRQ.

Importantly, she found the while patients reported symptom changes about one day before an exacerbation, FOT could pick up changes about three days ahead of an event.

“For a lot of patients it can be difficult to perceive how significant the change in their symptoms can be, because in COPD some of them cough all the time or they are breathless all the time.”

She said FOT was more objective than symptom monitoring and had the potential to evolve into an early indicator of acute exacerbations in COPD.

“We are limited with our therapeutic options for an exacerbation but even with what we have at the moment, as long as you start treatment early you can bring down the duration of an event and it has also been shown that can reduce the risk of a patient needing hospitalisation.”

Dr Zimmermann said the strength of FOT might lie particularly in home monitoring.

“Particularly in Australia with a lot of remote and rural areas, it could really have a big impact on people who aren’t living close to tertiary centres. They could be monitoring their lung function at home and we could incorporate our signals into an automated software which could alert the patients that their exacerbation risk is increasing so that they could start treatment themselves or seek medical review.”

“They could initiate their corticosteroids or if they have purulent sputum they could start their stand-by antibiotic early rather than waiting.”

She said the technique, which does not require any effort from patients and had a high level of adherence in the study (87%), may in the future complement usual methods of disease assessment and monitoring such as peak flow and spirometry.

“FOT is likely on the verge on transitioning from research-only to clinical practice, mostly because we are fortunate now there are commercial devices available.”

“I think having confirmed the high feasibility of using FOT in other studies and with the pace technology is progressing, it will be used even more widely.”