More doctors are choosing to work as specialists rather than GPs, pushing many to work in rural areas as Australia’s ever expanding medical workforce increases supply and competition for positions in metropolitan areas.

The ‘Evolution in the Medical Workforce’ report from Melbourne University also shows that the number of non-GP specialists is growing faster than the number of GPs, likely driven by increasing gaps in specialist and GP incomes.

“Higher numbers of doctors in training and non-GP specialists are beginning to spill over into rural areas,” said Professor Scott in his report.

As well as increased investment in regional training programs, the spillovers into rural and regional areas could also be caused by existing specialists spending more time in public hospitals reducing job opportunities for newly qualified non-GP specialists in major cities, he suggested. 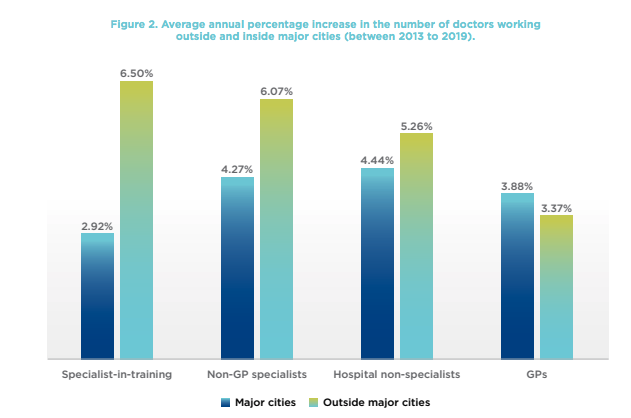 Professor Scott said it was notable that Australia lacked any national medical workforce policy to guide the numbers of doctors working in different specialities.

“A higher proportion of junior doctors are continuing to choose non-GP specialty training, as the number of specialists grows faster than the number of GPs,” his report noted.

“Over the past 20 years there have been no explicit policies designed to alter specialty choices. More GP training places do not alter doctors’ preferences or the relative attractiveness of general practice. There is recent evidence that the number of GP training places are not being filled, with falls in the numbers of applicants for GP training.”

Professor Scott said the widening gap in specialist and GP incomes might explain career choices among medical graduates, with specialists already earning almost twice as much as GPs and earnings increasing in real terms at rates of 2.2% vs 1.1% a year respectively.

In addition to higher earnings – particularly for paying off medical graduate debts – other drawcards for specialist work over GP practice included opportunities for procedural and academic work, he said.

“Whilst discretion on setting fees has provided some flexibility, there is only so much that can be done if there are fewer patients to go around,” they observed.

Professor Scott noted that the government has recently developed a National Medical Workforce Strategy to try and tackle some of the issues of doctor supply and distribution imbalances.

“ If the last 20 years is anything to go by, addressing these priorities will take time. Australia’s fractured health care system has significantly delayed effective national policy action to help ensure the best use of the medical workforce,” he wrote.

“Issues of specialty choice, rural and regional maldistribution, and self-sufficiency remain very important, with market forces continuing to dominate doctors’ decisions about their specialty and location of practice. Doctor’s decisions are underpinned by a largely unaltered fee-for-service payment model that rewards procedural work and sub-specialisation more than generalism and holistic care.”