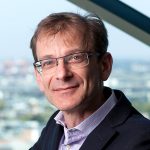 It’s a “no brainer” that liquid biopsy will eventually supersede tissue biopsy in guiding lung cancer treatment decisions, but more work is needed on the practical aspects of the procedure, early Australian experience suggests.

A trial of liquid biopsy for detecting T790M mutations in patients with non-small cell lung cancer (NSCLC) showed it had advantages over tissue biopsy for determining eligibility for osimertinib, according to pathologist Professor Stephen Fox, director of pathology at the Peter MacCallum Cancer Centre, Victoria .

In a study carried out in 791 patients with NSCLC at three Australian cancer laboratories, only two thirds of patients were eligible for tissue biopsy and only one third underwent the procedure because of barriers such as co-existing illness.

In contrast, 88% of patients were able to under a blood test, with results available within an average of five days, compared to 19 days with tissue biopsy.

Preliminary data from the trial showed that T790M mutations status could be detected in 47% of patients and driver mutation status detected in 59% of patients. In a subset of 290 patients, 29% were positive and 71% negative for T790M.

Professor Fox said a notable advantage of the liquid biopsy over tissue biopsy was that it opened up testing to clinicians in regional and rural centres, who accounted for 37% of test requestors.

A quality assurance program showed that some labs achieved more reliable T790M and EGFR results than others, although results improved over time.

Professor Fox said the early results were promising and he believed liquid biopsy would come into much wider use within the next ten years as both an initial test and for monitoring response to treatment. And while the current trial was targeted at a single mutation, liquid biopsy could potentially provide a snapshot of a patient’s total mutation profile.

“There’s a lot more work to be done in this area but we do know that it does work well for some mutations,” he said.

The likely model would be to use liquid biopsy first, and if negative go to tissue biopsy, he suggested.

However liquid biopsy had to show evidence of clinical utility and was unlikely to gain MBS reimbursement because it would be difficult to provide the local comparability data between blood and tissue for each mutation as required by the Medicare Services Advisory Committee, Professor Fox added.

With liquid biopsy tests likely to cost from $450 to several thousand dollars per test, depending on reagents, the provision was likely to come from pharmaceutical company sponsored schemes, he suggested.