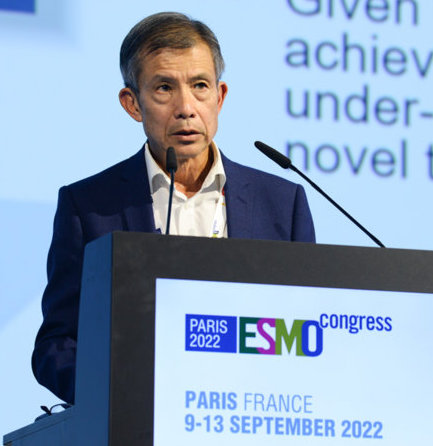 Anti-PD-L1 immunotherapy may be the best choice as front-line therapy in patients with advanced non-small-cell lung cancer (NSCLC) who are not fit to receive platinum-based chemotherapy, a UK study has shown.

Professor Siow Ming Lee, Consultant Medical Oncologist at University College London Hospitals (UCLH) told the ESMO 2022 meeting there is a substantial unmet treatment need for the 40% of patients with advanced NSCLC who are not eligible for platinum-doublet chemotherapy because they are ECOG performance status (≥2) and/or have substantial co-morbidities.

Professor Lee was the lead investigator in the IPSOS trial, a phase III study that showed overall survival benefits with front-line atezolizumab versus single-agent chemotherapy, in patients with (NSCLC) deemed ineligible for treatment with a platinum-containing regimen.

Twice as many patients were alive at two years when treated with atezolizumab versus  chemotherapy, he told the meeting.

The patients had NSCLC without driver mutations and were ineligible for first-line platinum-doublet chemotherapy due to combinations of poor performance status, comorbidities, and older age (≥70 years). Treatment was either atezolizumab 1200 mg IV q3w or single-agent vinorelbine or gemcitabine in 3- or 4-week cycles.

Quality of life measures such as cognitive and social function were stable or even improved for patients treated with atezolizumab vs chemo, the study showed. Immunotherapy also had fewer grade 3/4 treatment related adverse events (16.3% vs 33.3%) than the chemo arm, with fewer symptoms such as chest pain, appetite loss and cough.

Professor Lee said the study was notable for being the first randomised clinical trial to evaluate single-agent immunotherapy in poor prognosis patients. With the results showing one in four patients still alive at two years, first line immunotherapy should be offered to patients who would be deemed ineligible for platinum-based chemotherapy, he suggested.

Dr Lizza Hendriks of Maastricht University Medical Center, Netherlands, said the findings were reassuring because median OS for the atezolizumab arm was similar to historical data from the PePS2 trial of pembrolizumab monotherapy in PS 2 patients with NSCLC.

“So you have confirmation that, at least for select patients with PS ≥2 and those aged ≥70 years with comorbidities, immunotherapy is a good option,” she said.

However she cautioned that there were unanswered questions about which types of patients were involved in this trial and precisely why they were not eligible for platinum-doublet chemotherapy.

“PS ≥2 can be a result of the cancer itself or of comorbidities, thus it can be observed in a heterogenous group of patients making it more difficult to determine the optimal management strategy. For instance, if you have a rapidly deteriorating patient, it would be quite difficult to obtain benefit from any treatment, including immunotherapy,” said Dr Hendriks.

“It would be interesting to see details of the tumour burden (low tumour burden is often associated with better outcomes with immunotherapy) and comorbidities of patients involved in the trial or how stable they were in terms of PS prior to study enrolment. Only patients with a life expectancy of ≥8 weeks were eligible, and these are not patients with a PS ≥2 that is rapidly deteriorating. Furthermore, only patients without severe cardiac comorbidities and with adequate haematological and end organ function were eligible, so for me it is not clear why these patients were not eligible for carboplatin-doublet chemotherapy. Benefit was seen across PD-L1 subgroups, yet we know that single-agent immunotherapy works better in patients with higher PD-L1 levels.”

“To better understand how these findings will impact clinical practice, we need to identify the patients who will benefit, which could be those with relatively stable PS and maybe higher PD-L1 or relatively low tumour burden, or those with a poor PS due to comorbidities and not due to the NSCLC. We also need to evaluate biomarkers other than PD-L1, such as circulating tumour DNA (ctDNA) as from other studies we know that those without detectable ctDNA at baseline, or with ctDNA that becomes undetectable during immunotherapy, have the best outcomes,” concluded Dr Hendriks.