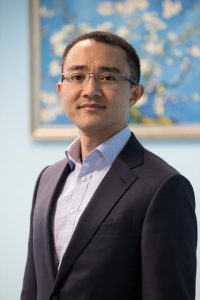 Dr Michael Wong is a spinal and neurosurgeon based in Melbourne.

In 2014 neurosurgeon Dr Michael Wong was almost killed by a mentally ill former patient in a frenzied stabbing attack in the foyer of his workplace, Melbourne’s Western Hospital.

The experience has left him with scars – inside and out – but he says it has also made him a better doctor.

Dr Wong was stabbed multiple times by Kareem Al-Salami, who was later diagnosed with paranoid schizophrenia, in an attack that made headlines around the country and raised questions about the safety of health professionals in the hospital system.

He sustained 14 stab wounds to the head, chest, abdomen, back, legs, arms and hands and was bleeding profusely as three by-standers dragged him to the hospital’s emergency ward where he was attended by 10 doctors.

He was rushed to theatre where life-saving surgery included the removal of part of a lung.

Three plastic surgeons repaired severed tendons and muscles in Dr Wong’s arms and hands, and for the following six weeks both his arms had to stay in splints.

One of his therapists believed his hands would never perform surgery again, Dr Wong tells the limbic.

“She has seen much less severe injury and the patient was not able to return to any meaningful work,” he says.

But Dr Wong did not share those fears. “I think very early on I realised I (would recover) full function of my hands, except it takes time. I didn’t lose a finger. All I had was lots of wounds, and wounds take time to heal, so [I believed ] if I do the exercises I would regain full function of my hands and would be able to return to work. But it was a bit of a long road.” 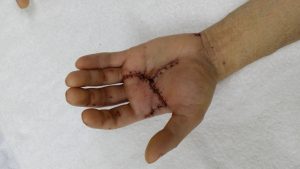 Along that long road the surgeon learned a valuable lesson about the gumption an individual needs to stay the course of a protracted rehabilitation program. He continued with the hand therapy for about a year.

And when he did return to work as a surgeon – at the Royal Melbourne Hospital –  several months after the attack, he found a new reservoir of empathy for his patients.

“Having significant injury and surgery changed my view of how I deliver medicine,” he says. “You feel how the patient can feel.

“Often in the medical field we dismiss patients when they have a more minor problem. But after going through what I have been through you realise that’s not quite true. Patients with smaller problems can have a big impact and you have got to have that degree of compassion or empathy that you relay to the patient.”

Dr Wong’s attacker Kareem Al-Salami had been a spinal surgery patient. The former refugee from Iran had undiagnosed paranoid schizophrenia and blamed Dr Wong for ongoing pain in his arm, neck and back. He believed the doctor had botched the surgery and was covering it up.

When the case was heard before the Supreme Court of Victoria, a judge ultimately found Al-Salami not guilty of attempted murder on grounds of medical impairment and sentenced him to 25 years in a secure forensic mental health facility.

These days Dr Wong says he takes much more time with his patients, and consequently consults with fewer of them.

“I realise we can’t deliver medicine using the McDonald’s model, we can’t just quickly do what needs to be done and then rush them away. The time spent with the patient, the explanation, is an essential part of getting someone better,” he says.

“‘Especially if a patient has spinal surgery, I spend more time advising them how to recover, physiotherapy or other forms of therapy to help them regain full function.

This has meant reducing the amount of time he works in the public system, and increasing his private practice, he says. Before, when working in a very busy public hospital, it felt like he was literally just doing the surgery and might never see the patient again.

Working in the public system pressures doctors to get through a large volume of patients, he says.

“Unfortunately, in the public hospital you don’t get much of a choice to try to slow down….funding is always an issue, there aren’t a lot of doctors so you start limiting time per patient. That’s not a medical issue, that is a policy issue.”

“But we need to focus on the quality of medicine being delivered not just do what the system asks us to do because increasingly medicine turns into fast food and patients are not satisfied, patients with mental issues are not being treated properly, there may be patients with anger issues they may take it out on the staff.

Dr Wong says he feels lucky that he’s been able to return to work and can talk about the attack without become re-traumatised.

The attack has left invisible scars too. He won’t return to the hospital where it occurred, and being in crowds sets his teeth on edge.

“I do pay more attention to personal security, for instance I don’t like a crowded hospital foyer. If there are a lot of people around I often wonder if there will be someone who might be mentally not so stable.”

And he has also used the media attention on his case to call on governments to better resource public hospitals, including beefing up security.

Dr Wong says he never could have imagined he would be attacked – and almost lose his life – in his workplace, but now believes the experience has made him a more compassionate doctor.

“It gives me a much deeper understanding of what patients go through when they face significant diseases and life events and gives me much better understanding in delivering the compassion and empathy that people need, not just the medical treatment.”