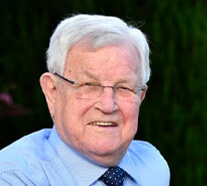 The Gut Foundation has announced that its founder, Associate Professor Terry Bolin OAM, has died at the age of 86.

Associate Professor Bolin, former Head of  Gastroenterology at the Prince of Wales Hospital, Sydney, founded the Gut Foundation in 1983 to promote greater public awareness and GP education around bowel diseases, particularly in relation to healthy diet.

He had clinical and research interests in lumenal gastroenterology in terms of acid reflux, malabsorption, colorectal cancer and Helicobacter pylori.

Famously, he was once likened to the manager who turned down the Beatles, because Associate Professor Bolin was secretary of the Gastroenterological Society of Australia in 1982 when he rejected a meeting abstract from a young Dr Barry Marshall who was proposing the revolutionary hypothesis that the bacterium H. pylori was the underlying cause of duodenal ulcers.

However as Associate Professor Bolin later told the ABC Science Show, the abstract was initially rejected because it contained no data and had missed the submission deadline.

He soon saw the significance of the results, not just for peptic ulcers, but also for the principle that gut bacteria could be a significant factor in many diseases.

“Barry was very stubborn but he had this enormous self-belief that what he’d found was right, so he beavered away here and in the US,” Associate Professor Bolin explained.

“It took 10 years and there was a lot of opposition. There were meetings that became shouting matches.”

According to a tribute written by Dr Ross Walker for the Gut Foundation, Associate Professor Bolin had a distinguished 60-year career as a clinician, researcher and high profile advocate for gut health.

“Always at the cutting edge of research and concerned to prevent rather than cure disease, Terry promoted a broad range of research from cancer to the microbiome,” he writes.

“He used his personal knowledge, network and superb communication skills to elevate the issue of bowel screening to the national agenda. He identified the need to build broad-based community awareness of the fact that screening for bowel cancer, a preventable disease, was under-utilised and unsupported by community education. He personally led numerous public campaigns funded by the Gut Foundation to encourage regular bowel screening (FOBT and colonoscopy) and at an earlier age.”

Professor Bolin was the author of dozens of clinical papers as well as educational books and pamphlets on diet, nutrition and digestive conditions, including a cookbook, co-authored with nutritionist Rosemary Stanton, that aimed to help people with digestive problems.

“His published work includes a ground-breaking study in 2007 conducted at Prince of Wales hospital which identified significant malnutrition in elderly patients upon admission but showed that early intervention with a dietitian could dramatically reduce length of hospital stay and health costs,” the Foundation said

Associate Professor Bolin also initiated and oversaw the clinical program for a series of international meetings entitled The Tri-Nations conference in gastrointestinal and liver disease, bringing together experts from Australia, New Zealand and South Africa to share latest research on gut health.

“Through it all, Terry has been friend and mentor, comfort and guide to countless Australians living with chronic and life-threatening gut problems including bowel cancer, irritable bowel disorder, Crohn’s disease, coeliac disease, endometriosis and the many other disorders common in our community,” writes Dr Walker.

He was Consultant Emeritus Gastrointestinal and Liver Unit, Prince of Wales Hospital and Conjoint Associate Professor of Medicine University of NSW for many years and retired after 60 years of clinical practice in Randwick in 2016. In 2018 he was awarded the Order of Australia Medal (OAM) in the Queen’s Birthday Honours for service to medicine in the field of gastroenterology.

“The Foundation extends its deepest sympathy to the Bolin family, particularly Terry’s devoted wife of 62 years, Robin. We mourn the loss of a great Australian.”