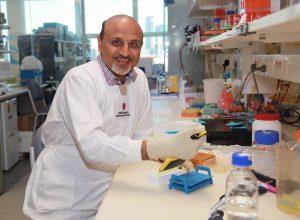 The phase 1 clinical trial, led by the QIMR Centre for Immunotherapy and Vaccine Development, treated 13 patients with in vitro-expanded autologous CMV-specific T cells.

Patients, from the Princess Alexandra and Prince Charles Hospitals in Brisbane and the Royal Adelaide Hospital, included recipients of kidney, lung and heart transplants.

Some patients were able to reduce or stop taking anti-viral medication altogether.

“We were also very happy to see no side effects – no damage to the transplanted organ,” he told the limbic.

Professor Khanna predicted the immunotherapy would also be applicable to recipients of other organs such as the liver.

And he is planning to expand the targets to include other opportunistic viruses such as Epstein-Barr, BK polyomarvirus in renal transplant patients, and adenoviruses in paediatric patients.

Professor Khanna said one of the practical challenges was that the current therapy took about 4-6 weeks to manufacture.

However he was now looking at developing a different strategy using healthy white blood cell donors to build up a T-cell bank.

Therapy could then be delivered to organ transplant patients within 24-48 hours.

He said it was likely that patients would benefit from early therapy – before the development of resistance or CMV-related complications.

Phase 2 and 3 trials would help determine how immunotherapy could be integrated into standard clinical management of organ transplants patients.

“These early results are extremely promising and we hope in future it will provide a new and routine way to treat transplant patients who become sick as a result of cytomegalovirus infection,” he said.

The findings have been published in Clinical Infectious Diseases.