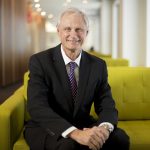 NSW gastroenterologist Professor Nicholas Talley is one of seven doctors inducted into the AMA Roll of Fellows, in recognition of their outstanding contributions to medicine, the medical profession, and the AMA.

Professor Talley, who is editor of the AMA’s Medical Journal of Australia, is cited as being a world-leading neurogastroenterologist, educator and researcher, and widely recognised as one of the most influential clinician-researchers in the world, with more than 1,000 papers published in peer-reviewed literature.

According to the AMA, Professor Talley has been Editor-in-Chief of the MJA since 2015, and was previously co-editor-in-chief of Alimentary Pharmacology and Therapeutics; and editor of American Journal of Gastroenterology. He is also the author of the authoritative textbooks Clinical Examination and Examination Medicine.

Professor Talley is a Senior Staff Specialist and gastroenterologist at John Hunter Hospital, Newcastle, and Pro Vice-Chancellor, Global Research at the University of Newcastle, He was one of the first 15 Fellows of the Australian Academy of Health and Medical Sciences (FAHMS). In 2018, he was honoured with the Companion of the Order of Australia.

“Professor Talley has contributed to AMA NSW and to Federal AMA by his contribution to excellence in medical education and the standards he has established for students, doctors in training, and doctors. As MJA editor, he has contributed to a highly valued member resource,” the AMA said in a statement.

Outgoing AMA President, Dr Tony Bartone, announced the additions to the Roll at the AMA National Conference, held via videoconference on 1 August.

“All of these doctors have excelled not just in their medical specialties, but in their roles as advocates for the profession.

“They have made real contributions at the State and Federal level to improve working conditions for doctors, to improve safety for patients, to train the next generations of medical practitioners, and to make the Australian health system work more effectively for patients and communities.

“I commend them for their service.”