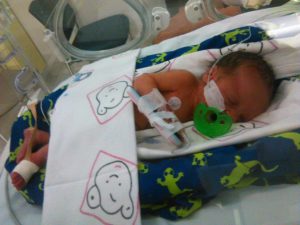 It’s a false economy to screen neonates for hypoglycaemia with cheaper but less accurate non-enzymatic glucometers, according to a New Zealand cost-analysis of cot-side screening methods.

The study authors say non-enzymatic glucometers are designed for use in adults and their precision is optimised for normoglycaemia and hyperglycaemia. In the hypoglycaemic range, they have been shown to both over- and under-estimate blood glucose levels.

“Nevertheless, they are wide­ly used to screen for and diagnose neonatal hypoglycae­mia because they are commonplace for glucose monitoring in adults and older children with diabetes, are easy to use, and require only small amounts of blood,” the study authors note.

Their study compared the costs of using a point-of-care enzymatic reaction glucometer for all measurements with no confirmatory laboratory analysis versus a non-enzymatic glucometer for the initial blood test followed by labora­tory tests when the initial finding was indicative of hy­poglycaemia.

Costs included both consumables such as test strips, lancets and collection tubes as well as staff time, with the mean number of tests ranging from 6 to 11 in the study scenario.

Total costs using the enzymatic glucometers were calculated to be NZ $86.94 compared to NZ $97.08 using the cheaper, non-enzymatic devices.

While laboratory enzymatic methods of glucose measurement were the gold standard, they said cot-side screening for neonatal hypoglycaemia had the advantage of convenience and rapid results.

“However, that does not take into ac­count either the immediate implications of using a screen­ing method with a level of accuracy that requires re-test­ing to verify abnormal results, or the long-term repercussions of failing to identify and treat cases of hy­poglycaemia.”

“The requirement for additional blood sam­pling to confirm low results also increases the number of invasive procedures performed on the newborn infant and may delay treatment where confirmation is required by laboratory testing.”

“In preterm babies, numbers of painful procedures are themselves associated with neuro­developmental impairment. In addition, false-posi­tive results can result in over-treatment, thus increasing costs as well as separating the infant from its mother, and interfering with the establishment of breastfeeding, which may in turn have adverse long-term health and cognitive effects.”

“It is hard to imagine another scenario in medicine where screening to guide diagnosis and management of a brain-threatening condition is commonly undertaken using an instrument known to be inaccurate and requiring abnormal results to be repeated, and which is justified primarily on the basis of apparent­ly lower short-term costs,” the study authors concluded.

Co-author Professor Jane Harding, a neonatologist from the University of Auckland, told the limbic she was sure that similar cost considerations would apply in Australia.

“I do not have any reliable data about the relative use of the two devices, but I am aware that many, and perhaps most, hospitals do not yet use the enzymatic test.  Some are keen to change to them, and we hope that the cost analysis data will help them make the argument.”

She added there were no relevant national guidelines about neonatal hypoglycaemia in Australia, although many hospitals would have their own.

The Perinatal Society of Australia and New Zealand was unable to provide any comment on the use of bedside glucometers.