Move away from seek and destroy mentality: Tuttle

An active surveillance approach to the management of patients with very low risk thyroid tumours “can be considered” as an alternative to immediate surgery, the conference has heard.

Delivering the ESA Taft lecture Professor Michael Tuttle from the Memorial Sloane Kettering Cancer Center in the US told the audience that small thyroid cancers (<1cm) are almost always asymptomatic, incidentally found, are present in up to 10% of the adult population and are the predominant reason for the alarming rise in the incidence of thyroid cancer.

Traditionally surgery was recommended for biopsy proven thyroid cancer but several studies now show that small volume disease progresses very slowly in the vast majority of patients and is often not “cured” with additional surgery or radioactive iodine.

“Some of our well meaning treatments may be associated with risks that are greater than the potential harm that could be caused by small volume disease,” he told delegates.

“This is not palliative care, this is not watchful waiting where you can’t cure somebody, this is deciding you don’t necessarily have to do something now,” he told delegates.

It involved an active observation of patients with known or highly suspected disease where therapeutic delay has no clinically significant impact on outcomes.

This approach was being taken in many other cancers like prostate cancer, some lymphomas and other urethral cancers, he noted.

But he stressed that it was important that the right patients were selected.

“I don’t want you to walk out of here saying nobody with thyroid cancer needs surgery because there are some patients with clinically significant disease who need to be treated,” he told delegates.

In research published in press in Thyroid Tuttle and his team grouped patients into ideal, appropriate and inappropriate candidates for active surveillance [see below]. 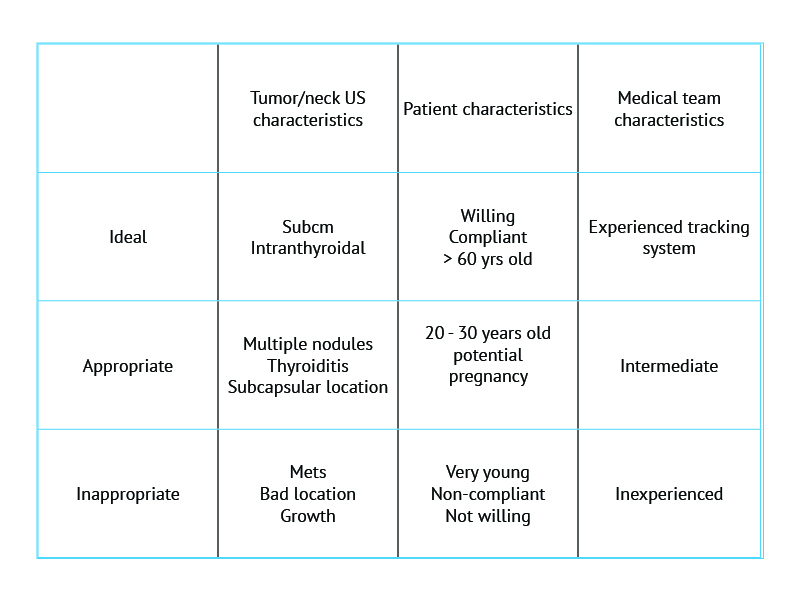 New ATA guidelines, which are due to be published this year, will reflect the changes in thinking and management, he told delegates.

A cytology diagnostic for a primary thyroid malignancy will almost always lead to thyroid surgery however an active surveillance management approach can be considered as an alternative to surgery in:

Furthermore, the 2015 ATA guidelines strongly discourage FNA of asymptomatic sub-centimeter thyroid nodules, even if ultrasonographically suspicious, endorsing serial ultrasonographic follow-up with cytology evaluation recommended only if there is evidence of disease progression.

“Our goal should be to stop diagnosing these papillary microcarcinomas, from experience it’s easier to get someone to agree to an active surveillance approach before you stick a needle into it,” he told delegates.

We need to move away from the 1990’s approach of “seek and destroy” every primary/residual/recurrent thyroid cancer, Tuttle said.

“The general approach to most of the patients we see in the clinic is slow down, take a look work out if the disease is quiescent, understand location and follow these guys over time,” he said.