PCSK9 inhibitor no risk for diabetes 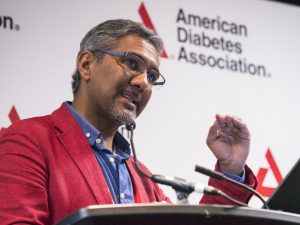 The use of PCSK9 inhibitor alirocumab for LDL-cholesterol lowering in post-ACS patients does not appear to have any adverse glucometabolic effect on people regardless of glycaemic status.

Speaking at the 2018 ADA Scientific Sessions in Orlando, cardiologist Professor Kausik Ray said the pre-specified analyses of the ODYSSEY Outcomes study showed no signal for new onset diabetes in people who were normoglycaemic or had prediabetes at baseline.

Alirocumab also had no effect on HbA1c or fasting blood glucose in either group over almost three years.

“And in fact if you combine these groups together you find HbA1c was statistically slightly lower in the alirocumab group but perhaps not clinically relevant.”

Professor Ray, from the School of Public Health at Imperial College London, said the study population of patients in their first year post-ACS comprised about one third with diabetes, one third with pre-diabetes and one third without diabetes.

Almost 19,000 patients with LDL cholesterol ≥70mg/dL (1.81 mmol/l) received high intensity statin treatment during a run-in period then randomised to either placebo or alirocumab titrated to achieve an LDL of 25-50 mg/dL (0.65-1.29 mmol/l).

An expert adjudications committee blinded to the treatment arms determined any new cases of diabetes in the study groups.

In a late-breaking presentation, Professor Ray said the risk of recurrent ischaemic events after an ACS and with diabetes remained high despite intensive statin treatment.

The American Association of Clinical Endocrinologists/American College of Endocrinology (AACE/ACE) guidelines recommended an LDL of <55mg/dl (1.42 mmol/l) for people at extreme risk of a repeat event, he said.

“The present data would suggest that moving that goal to 25-50 mg/dl (0.65-1.29 mmol/l) would give you a bigger absolute benefit in a high-risk patient population – that is, those having diabetes and ACS – even though the relative risk remains constant.”

Professor Ray said the data provided ‘robust reassurance’ that alirocumab does not increase the risk of new onset diabetes.

This is consistent with earlier findings from ODYSSEY trials but inconsistent with other evidence that genetic variants, which mimic the effects of PCSK9 inhibitors, increase the risk of diabetes.