“I am now reassured” – SGLT2 inhibitor off the hook re: amputations 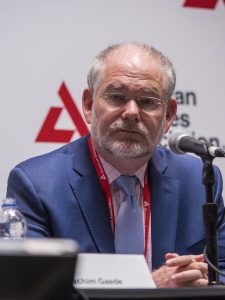 Concerns that cangliflozin (Invokana) increases the risk of amputations have been allayed in a large retrospective study of the SGLT2 inhibitor versus other drugs in its class and non-SGLT2 inhibitors.

The findings from the OBSERVE-4D study were presented at the ADA 78th Scientific Sessions in Orlando and concurrently published in Diabetes, Obesity and Metabolism.

Data from four US administrative claims databases provided the basis for a real world analysis of more than 700,000 patients with type 2 diabetes.

The study found no risk of below-knee amputation with canagliflozin in the general type 2 diabetes population or in a sub-group of patients with established cardiovascular disease.

Hazard ratios ranged from 0.72 to 1.14 for canagliflozin compared to other glucose lowering medications either in or out of class.

Professor John Buse, head of endocrinology at the University of North Carolina, said SGLT2 inhibitors have an important role in reducing cardiovascular events in people with diabetes.

OBSERVE-4D confirmed a significant reduction in hospitalised heart failure (HR 0.39-.44) similar to that seen in randomised controlled trials, other real world evidence and across the SGLT2 inhibitor class.

The findings served as confirmation of the internal validity of OBSERVE-4D, he added.

Professor Buse said the adverse events in the CANVAS trial, which first triggered concern and led to a product warning by the FDA, were almost exclusively in high-risk patients including those with previous amputations, peripheral vascular disease, neuropathy or elevated HbA1c.

However for other patients especially those with cardiovascular comorbidities, the benefits of SGLT2 inhibitors far outweighed any risks, he said.

“Physicians should feel comfortable and confident in prescribing the class to their patients. I was critical in the past but am now reassured. I have a serious conversation with patients that what will put them in the ground is cardiovascular disease.”