Growth hormone may have role in boosting cognitive function after stroke

Australian researchers are part of an international collaboration investigating whether growth hormone may have a role as a ‘brain fertiliser’ to improve cognitive function in stroke survivors.

Published in the journal Stroke, their findings “provide compelling preclinical evidence for the usage of GH as a potential therapeutic tool in the recovery phase of patients after stroke.”

“We are proposing that growth hormone could play a critical role in brain repair after injury. Specifically, we found that growth hormone treatment after stroke significantly improved learning and memory performance – a promising development for survivors around the world,” said University of Newcastle neuroscientist Associate Professor Rohan Walker. 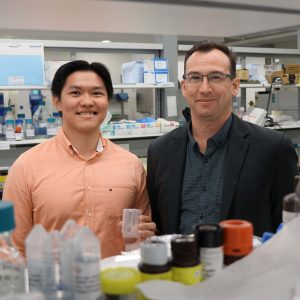 An analogue of the peptide hormone released from the pituitary gland, synthetic GH is already used by endocrinologists in treatment for GH deficiency.

“Although already used in medical treatment, this is the first time growth hormone has been looked at in this application. Our findings show that a boost of growth hormone in survivors could be a new link between stroke and recovery,” Dr Ong said.

In their study in a mouse model of stroke, the research team evaluated the effects of administering GH at 48 hours post-stroke for a period of 28 days.

The novel method of drug delivery was an implantable system for controllable GH supply.

“Our results show a significant improvement in learning and memory tasks after the therapy, as well as a reduction in neural tissue loss,” the researchers commented.

“We also found that growth hormone treatment promoted ‘brain plasticity’ such as new blood vessel growth and the repair of neuronal networks after stroke, as well as a robust increase in the levels of neurotrophic factors or ‘brain fertilisers’ which promote cognitive functionality.

“The findings provide exciting new pre-clinical evidence for the use of GH as a therapeutic tool in the recovery phase of patients after stroke, and have the potential to change treatment altogether,” Dr Ong said.

“We have studied the effects of growth hormone on recovery and protection after stroke for quite a while. We have had some suspicions over the years that a proportion of stroke patients are developing GH deficiency. We have demonstrated that this happens after traumatic brain injuries and we are now in the middle of a similar study in stroke patients in Newcastle. Preliminary data indicates that maybe 20-40% of the cases might develop a deficiency. We have previously also in human material demonstrated that related hormone insulin growth factor-1 circulating in the blood stream after a stroke is linked to better recovery.”

According to Professor Nilsson,  GH levels decline slowly over the years in the elderly population. It has previously been demonstrated that this decay is linked to reduction of the capillary network in the brain. In the latest study, giving GH for 28 days resulted in significant growth of the fine capillaries in the brain. This, in turn, could provide support for plasticity and recovery processes.

“Together with other positive effects on synaptic proteins and other relevant growth factors, we see this as an interesting translational link where relevant specific mechanisms are further understood. We believe that these mechanisms are related to the observed improvement of the animals cognitive abilities. This is particularly interesting since cognitive dysfunction after stroke constitutes a huge problem that we try to find different ways to treat.”

Professor Nilsson said that since GH is already in clinical use in humans. it may not be too difficult to adopt it for new indications, such as stroke rehabilitation.

“We are using a drug that is already established in the clinic. Growth hormone has been used for other purposes in humans for decades so the substance has all the necessary approvals already.We aim to start feasibility studies using GH within a year roughly.

Professor Michael Nilsson MD FAFRM (RACP) PhD is an internationally well-established neuroscientist with over two decades experience within the fields of astrocyte biology, brain plasticity and recovery after stroke, and a consultant neurologist based at John Hunter Hospital in Newcastle.

While retaining his research network in Sweden, Australia and internationally he is now building a strong research platform within HMRI. In 2016 he was accepted as a Fellow of the Australasian Faculty of Rehabilitation Medicine (RACP), while in 2017 was appointed Chair of the University of Newcastle’s Centre for Innovative Technologies in Rehabilitation Settings (CITRS).