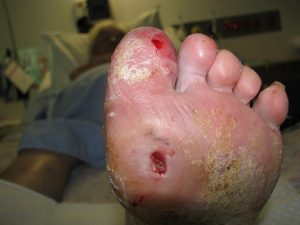 The disability burden caused by diabetes-related lower extremity complications exceeds that of ischaemic heart disease and cerebrovascular disease, according to an analysis of Global Burden of Disease data.

The authors of a letter in Diabetic Medicine said global estimates of years lived with disability (YLD) and disability-adjusted life-years (DALY) due to diabetes-related foot disease were often hidden within aggregated estimates of the impact of diabetes.

However the 2015 Global Burden of Disease Study provided some disaggregated data on neuropathy, which included diabetic neuropathy, foot ulcers and leg amputation. Only a small proportion of the data on peripheral complications would be related to the upper extremity, they said.

The authors said based on the data, diabetes-related lower extremity complications (DRLEC) would affect about 159 million people worldwide (~2.2%).

“As such, diabetes-related lower extremity complications would rank within the top 40 causes of prevalence: lower than chronic kidney disease (~4.4%), but higher than ischaemic heart disease (~1.5%) and cerebrovascular disease (~0.6%).”

They said YLD as a result of diabetes-related lower extremity complications (20.5 million) ranked within the 10 top causes of global YLD – this time higher than chronic kidney disease (8.2 million) as well as ischaemic heart disease (7.3 million) and cerebrovascular disease (6.5million).

And disturbingly, diabetes-related lower extremity complications were on the increase within the top 30 causes of global YLD.

“In the meantime, these findings highlight the need for policymakers to prioritize policies that improve evidence-based care for people with DRLEC, and thus, potentially reduce a large cause of the global burden of disease.”

Lead author Dr Peter Lazzarini, principal research fellow in the School of Public Health and Social Work at the Queensland University of Technology, told the limbic the findings were perhaps unexpected – but only at first glance.

“If you stand back and look at it, it’s probably not out of the box when we think that diabetes-related foot disease is the leading cause of amputations. It’s nearly a top 10 cause of hospitalisations and it’s one of the leading causes of falls and fractures.”

“It’s always important to quantify the burden of any disease you are working on so hopefully you can start to reduce it over time. That’s the aim – to end amputation caused by diabetes within a generation, and associated hospitalisations as well.”