Thousands of skin cancer procedures missed due to pandemic

Skin cancer-related diagnostic and therapeutic procedures have yet to fully recover from the COVID-19 lockdown-induced slump in the first half of 2020, according to a report from Cancer Australia.

The data, based on MBS claims through the private hospital system and public hospital outpatients, has shown for example that the numbers of definitive surgical excisions of melanoma – as well as for other cancers such as breast and colorectal cancer in September 2020 have not recovered to pre-COVID levels.

Total MBS services for definitive surgical excisions of melanoma fell by about 25% between March and May 2020.

While there was then a slow recovery, the report found the numbers of surgical procedures for melanoma in July, August and September remained 5-12% lower than in March 2020.

“Comparing the total national number of services provided in January to September 2020 to the same period in 2019, there were 6% fewer surgical procedures for melanoma skin cancers in 2020 which equates to 3,036 fewer procedures,” the report authors said.

The report also noted that removal of premalignant skin lesions including solar keratoses also fell during the pandemic period, decreasing by about 30% between March and April (from 56,606 to 38,405 services) with services  about 4% and 12% greater in in July to September than in March. Overall, there were 9% fewer ablation procedures for premalignant skin lesions in 2020 than in 2019, which equates to 47,534 fewer procedures

Capacity to catch up

Cancer Australia CEO Professor Dorothy Keefe told the limbic that Australia at least had the capacity to recoup lost ground.

“I was talking to colleagues in the UK and Europe this week and compared with us, the numbers of excess cancers due to the delays in treatment are going to be horrific.”

“We have said 7,000 or 8,000 cases have probably been missed this year but we are in a position to pick them all up next year. They are saying they have missed tens of thousands and are in no position to catch up.” 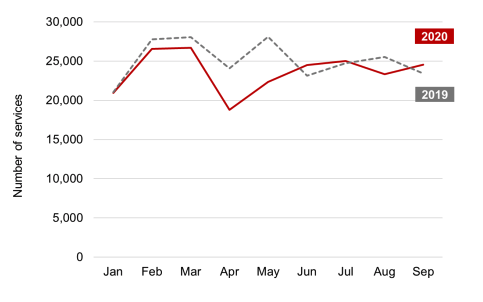 Professor Keefe said public awareness campaigns, to overcome people’s reluctance about going to health services stemming from when there was the risk of infection, were one side of the equation.

She said the flip-side was that in order to cope with increased numbers of people presenting for cancer services, everyone had to be working at the top of their scope of practice.

“And you can do the maths…we need extra oncologists just to see those 10,000 patients. We can’t suddenly produce them as it takes ten years to train them. So what you have got to say is: How are we going to enable the system to deal with that?”

“And what we have to do there is make sure that everybody is only doing things that only they can do. So it’s about everyone operating at the top of their license.”

She said an appropriate system-wide response might be increasing administrative and support staff to deal with work delegated down the chain.

“But that takes planning, and will, and a bit of finance. I think where we are going to come unstuck, if we do come unstuck, is going to be in competing priorities for funding and investment and support.”

Professor Keefe said that staff protection, wellbeing and resilience would also be important considerations in the COVID-19 catch up.

“It is no good to anybody if we drive everybody into the ground and they collapse. The important thing in the next year is recognising there is going to be an increase and advocating for support to manage that.”

“It’s really important to take breaks and weekends and have a holiday even if it looks so busy you can’t. You are actually more efficient when you are rested and you don’t make as many mistakes.”