Buruli ulcer: the diagnosis is easy when you think about it 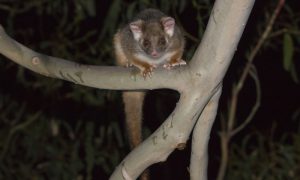 The ringtail possum, one of the cutest and much loved Australian marsupials, is believed to be one of the culprits in the increasing numbers of Buruli ulcers seen in Victoria.

Professor Paul Johnson, deputy director of infectious disease at Austin Health, told the ACD ASM that almost all Victorian cases were geographically restricted to the Mornington and Bellarine Peninsulas.

Three hundred and forty cases were notified in Victoria in 2018, with 52 so far this year.

Professor Johnson said the disease was characterised by severe tissue destruction, huge numbers of Mycobacterium ulcerans in subcutaneous tissue, ghost cells and no inflammatory response due to the local immunosuppressive properties of the mycolactone toxin.

He said clinicians “couldn’t go wrong” with the diagnosis – assuming they thought of it.

“It’s a neglected tropical disease in temperate Australia,” he said.

A decent swab and smear from the lesion would reveal the organisms quickly and a PCR could confirm the results in 2-3 days.

However not all infections presented as an ulcer – a cellulitic was possible – in which case a biopsy may be required.

Treatment was oral rifampicin and clarithromycin for eight weeks and individualised care as required, including incisions and drainage for some lesions.

Paradoxical treatment-related reactions have been reported and may require oral prednisone and debridement.

“Most people are not usually sick, they don’t have fevers or have to go to hospital in an ambulance. The lesion is something that just keeps getting bigger and won’t go away and doesn’t respond to standard treatment.”

He said GPs might initially think it was a staphylococcal skin infection and give cephalexin until they saw the patient a week later and realised it was worse.

Professor Johnson said insect transmission of the infection had been suggested with a 2011 study finding a strong association between PCR-positive M. ulcerans in mosquitoes and the risk of human disease.

And the typical location of lesions on the ankles, backs of calves and elbows rather than the hands and feet suggested insects were involved more than direct contact with a contaminated environment.

M. ulcerans had also been detected in the faeces of possums – suggesting they were a reservoir and multiplier of the organism in the environment. Domestic animals have also been reported to have the disease.

Australian cases of the disease have also been reported in central and far north Queensland.

“All the M. ulcerans in the world that cause aggressive human disease are related – the classic lineage – but the ones we’ve got in far north Queensland probably arrived in Australia from PNG.”

“There are many ideas but no evidence e.g. fruit bats migrating or people bringing plants back from East Gippsland.”

“It’s been in Australia for a long, long time; and for some reason it’s becoming more active,” he said.