Climate warrior named next president-elect of the RACP 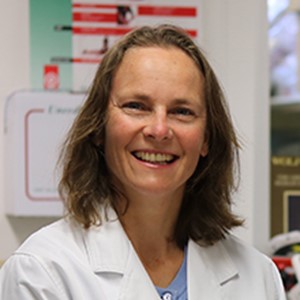 Clinical pharmacologist and high-profile climate campaigner Professor Jennifer Martin has been named the next president-elect of the RACP, edging out four other candidates for the college’s top role.

Chair of clinical pharmacology at the University of Newcastle’s School of Public Health, she received 847 votes out of a total of 2584 in the poll, which concluded earlier this month.

The researcher, physician and former Rhodes Scholar ran a campaign promising to bring accountability and change to the RACP, pledging to “reorient the college outwards” to become a major player in health policy.

She said she would ask the board to freeze fees for trainees until the college fixed its troubled online exam system and initiate a review into the specialist training program.

This would have the goal of making registrar training more flexible and family friendly, she said.

Professor Martin also declared she would make climate action a cornerstone of her leadership, including by forgoing in-person travel in favour of online meetings wherever possible for college business.

It came after she made headlines last June over her a public campaign to oust former Deputy Prime Minister Mark Vaile as chancellor of the University of Newcastle over his ties with the fossil fuel industry.

At the time, she resigned from her position on the university’s council saying she had been contacted by multiple colleagues outraged over the appointment of Mr Vaile, who was also chairman of Whitehaven Coal.

Within three weeks he’d resigned, while Professor Martin was reinstated on the council just four months later by popular vote.

In a statement on her campaign website last month, she argued for the college to put on climate activism training for members as part of its CPD program.

“The RACP as a large educator of specialist medical practitioners who teach and train our future workforce has a duty of care to communicate about the climate emergency and encourage action at all levels,” she said

“I have such traits and have already demonstrated these in issues related to climate change.”

Her term as president-elect officially begins following the RACP’s annual general meeting on 13 May.

However, Professor Martin will have to wait two years to take on the role of president, which will go to current president-elect Dr Jacqueline Small.