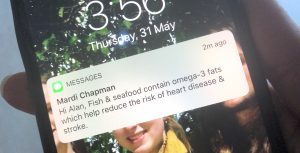 Text messaging can motivate patients with coronary heart disease to improve their adherence to dietary guidelines.

According to a randomised controlled trial of more than 700 patients with proven CHD, receipt of just one diet-related text message per week increased adherence over six months.

Dr Karla Santo, a cardiologist and research fellow at The George Institute for Global Health and research associate at the University of Sydney’s Westmead Applied Research Centre, said the study was part of a larger effort on motivating other lifestyle changes including physical activity and smoking cessation.

She told the limbic there was some crossover with participants reporting that messages in one component of the study triggered healthier behaviours in the others.

The language and content of the text messages were developed based on secondary prevention guidelines, techniques around behaviour change, and patient and clinician input.

She said another larger, nationwide project is currently underway which would also follow patients in the longer term.

“We do know that improvements might either stabilise or decrease but for the moment we don’t have any data on that.”

The Westmead Applied Research Centre is hoping to eventually deliver a program that clinicians can refer patients to as a stand-alone intervention or perhaps as part of cardiac rehabilitation, Dr Santo added.