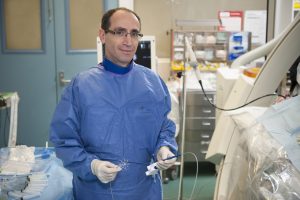 Radiofrequency ablation for atrial fibrillation (AF) can be performed with a low complication rate, according to a review of cases at the Royal Melbourne Hospital.

The rates of complications – 0.84% and 0.73% respectively – match the lowest reported in other series and compare favorably to other rates as high as 9.1%.

There were no deaths or myocardial infarctions and one case of cerebral artery stroke but with no major permanent disability.

Lead author Professor Jonathon Kalman told the limbic the study confirmed other data that female gender was a predictor of complications.

“It is however a minor increment against a background of low risk.”

Patients older than 70 years were at no higher risk of experiencing complications.

“Age is not a barrier if everything else is okay,” he said. “The impact of AF on patients can be debilitating – breathlessness, they can’t sleep, they can’t do the activities they would like to; the impact on their quality of life with a successful procedure can be immense.”

The series demonstrated it was possible to have low complication rates, admittedly in a population with a low prevalence of comorbidities.

“In the current study, mean BMI was 28 and the absence of morbidly obese patients in the cohort may also have contributed to a low event rate,” the study said.

Most procedures were pulmonary vein isolation alone (76.3%), with others supplemented by strategies including left atrium lines (13.4%), posterior wall (6.9%) and cavotricuspid isthmus (10.1%).

Complete isolation of the pulmonary veins was achieved in 98.7% of cases.

Four of the five complications related to use of the transoesphageal echocardiogram occurred in women ‘possibly due to their smaller size and emphasising the need for great care with the TEE probe’.

High case load (about 300 procedures per year), routine use of general anaesthesia, echocardiographic guidance of transseptal puncture, as well as conservative power setting and ablation duration were some of the factors likely to contribute to the low complication rate.

Professor Kalman added that as well as restoring quality of life, there was emerging evidence that ablation could also provide a mortality benefit.