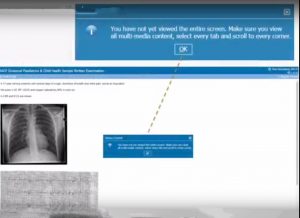 The RACP is facing tough questions over the computer  failure that shut down its annual written exam, forcing over 1000 trainees to have to repeat the high-stakes test next month.

Candidates have described shambolic scenes on Monday when an “unknown technical fault” locked many out of their computers and unable to complete the second part of the 6.5-hour examination after lunch.

In a break from tradition, the high-stakes Divisional Written Examination had moved from a paper to online format with tests held at over 40 sites around the country by the computer-based testing provider Pearson VUE.

Social media is awash with horror stories of candidates hit by the technical failure, with some saying they were “quarantined” in exam rooms for hours without access to toilets. They claim the college’s first official advice of its cancellation was disseminated on Facebook, while candidates who had completed the exam and left the venues received the news on their mobile phones.

According to Dr Tessa Kennedy,  chair of AMA NSW’s council of doctors in training, the exam chaos started well before the computer system crashed.

Speaking in a personal capacity rather than on behalf of the AMA, she said candidates had faced difficulties as soon as they arrived, due to a lack of signage and invigilators inside the venues, and the staggered start times added to the sense of disarray.

“People would be sitting down and starting their exam and other people were walking through and getting logged in and there was talking and noise and doors opening and shutting.”

There were cases where the computerised exam timers did not pause while candidates took their lunch break, so time was “arbitrarily added” to compensate, and some candidates were allowed to take toilet breaks unsupervised.

“They could have had access to their phones if they were sneaky enough to hide it there,” she claims. “It was so easy to compromise the exam.”

But the college’s handling of the computer crash remains the low point, she says.

“When communication started to arise that a number of people had been locked out, that filtered through then the Pearson VUE guys came around to stop those who were still going and said ‘sorry it’s been cancelled’ and showed them a piece of paper with the advice that didn’t even have a college letterhead. It was literally almost Comic Sans printed on a bit of paper.”

“Other people who had already left started getting WhatsApp messages – it was really poorly disseminated.

“You would expect all get a blanket email from the college which is their usual mode of communication. Instead the first actual comms from the college came via Facebook posted into a group, which few people are members of.”

The impact has been devastating for over 1000 doctors who expected to be celebrating a major milestone but are now scrambling to cancel holidays and reschedule hospital rosters so they can prepare for the replacement paper-based exam to be held on March 2.

“There was this big shock and rage and disbelief,” Dr Kennedy says.

Amid an outpouring of support by more senior doctors come serious concerns for the mental health of trainees.

“There are lots of trainees who are very distraught who have gone home just devastated and sobbing to their partner or their families. I think mental health concerns are real,” says Dr Kennedy.

Meanwhile, she says the college’s apology has underwhelmed those affected by the exam breakdown.

“To say ‘we’re sorry for the distress’ shows no insight into the breadth of impact this has on individuals, on hospitals and potentially on patient care.

“It feels like a lot of concerns were raised before the day and they (candidates) were all told ‘don’t worry, of course we have contingency plans’…. everyone felt really dismissed.

“The college needs to make amends with the trainees. Everyone is disillusioned.”

Many trainees, backed by senior doctors, are now demanding to know how such a catastrophic failure could occur in the staging of the high stakes exam that is held only once a year and which trainees have just three attempts to pass to become physicians or paediatricians.

For its part, the college has been posting daily updates on its website, its latest on Thursday, in which it explains all must complete the whole paper again for reasons of fairness and security of questions, and refuses to commit to  financial compensation or to reimburse exam fees.

“We understand that this has been unexpected, stressful and distressing. We have and continue to apologise for this. We encourage all trainees to talk with their supervisors, colleagues, family and friends,” the statement by RACP president Dr Catherine Yelland said.

The statement also urges those who need it to contact its confidential 24-hour phone counselling service, which has been allocated extra resources.

“The College is working with the service provider Pearson VUE to complete a report on Monday’s events.

The College Board has arranged a panel to review the issues around the examination, including the technical aspects, the operation of the examination centres, the response of the College, the impact on the trainees, and how we can best look after them.

“We will of course, take these findings forward to future examinations. We have also undertaken to let our members know the outcome, as soon as we can,” it said.

In a video posted by the RACP prior to the exam, candidates were reassured that backup plans had been put in place in the event of any problems with the new computer based testing system.

“There are a number of different contingency plans that we  have in place in case of a computer failure [or] power outage,” it said.

“That has been worked through between the College and Pearson VUE.  So that is something we have considered, so if there is any issue, rest assured that will be handled swiftly.”