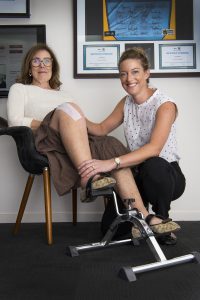 A simple and inexpensive pedalling-based protocol has been shown to be more effective than standard rehabilitation in the immediate postoperative period after total knee replacement (TKR).

Orthopaediac surgeon Associate Professor Chris Vertullo told the limbic the research team expected the outcomes from the pedalling program would be similar to those from the usual care group.

“I’ve always advocated a pedalling program postoperatively because it is self- directed, there’s less pain, and anecdotally they seem to do better. But in watching your own patients, you’re prone to confirmation bias.”

“Within the randomised controlled trial, we thought the pedalling would be similar to standard rehab but it was actually better which is surprising.”

The study found functional measures such as the 6-minute walk test (6MWT), 10-m walk test (10MWT) and the Timed Up & Go test were significantly better in the pedaling-based group than in the multi-exercise group at two days postop.

The patient-reported Oxford Knee Score and EQ-5D score were also superior in the pedalling group at two days and two weeks post op.

“I think the advantages are that it is patient-directed and they can do it when they want to and use their other leg to help them turn the pedals around. And it’s a very safe exercise; anybody can do it. It’s almost impossible to do it incorrectly.”

“So it’s simple and it’s effective and it’s actually very cost effective too; you don’t have to have the therapist standing there showing patients how to do the exercise properly.”

The study also found the length of hospital stay was significantly shorter for the pedalling-based group (2.5 days v 3.0 days; p=0.024).

He said a recent systematic review and meta-analysis led by colleague Larissa Sattler, an orthopaedic physiotherapist and PhD candidate at Bond University, had highlighted the lack of good evidence for any particular rehab regimen post-TKR.

“It’s amazing the money spent on rehab after knee replacement and there is absolutely no evidence for what is superior. And every person who prescribes it thinks they know what the optimal program is but no one has actually done the research.”

The findings are consistent with other research published in the limbic last year that found a paucity of evidence for inpatient rehab after hip replacements.

Associate Professor Vertullo, director of Knee Research Australia, said a simple self-directed program such as pedalling, stretching with a band and walking would be effective in the immediate post-op phase for the majority of patients.

“The more complicated you make the rehab, the less likely people are to do the exercise that is most beneficial.”