Rheumatologists are right to be sceptical of claims that biosimilars are equivalent to bio-originator molecules because the evidence is either lacking or flawed, the ARA conference in Melbourne heard.

Professor Roy Fleischmann, a Texas-based rheumatologist who has been lead investigator in many clinical trials of biologics, said there was some evidence to show biosimilars may be an acceptable alternative to a bio-originator molecule in treatment naïve patients, but evidence was lacking for switching between different molecules.

While biosimilars have similar amino acid profiles to bio-originator molecules they differ in terms of manufacturing processes, protein structure, incipients and immunogenic profiles, he said.

Professor Fleischmann said he accepted that evidence from clinical trials of bio-originator molecules could be extrapolated to biosimilars in treatment-naïve patients.

But he said the level of evidence used to justify equivalence when switching between different molecules was low quality and did not stand up to close scrutiny.

He cited the example of the NOR-SWITCH trial of infliximab, used to underpin a consensus statement from the American College of Rheumatology on the acceptability of biosimilars.

Disease worsening occurred in 30% of patients after switching from Remicade to its biosimilar, and yet the study authors concluded that biosimilars were non-inferior. Professor Fleischmann noted that subgroup analysis showed the confidence intervals for non-inferiority only applied to patients with Crohn’s disease and not to those with inflammatory arthritis such as RA or SpA.

Other studies of biosimilar switching had shown that 16% of patients had disease flares, a rate that Prof Fleischmann deemed ‘unusual’ and ‘unacceptable’ for patients who had been using biologics for an average of six years.

And no trials had addressed the real world situation in the US where there may be up to six different biosimilars and patients could be switching between them month after month in a bid to save costs.

“I would have no problem using biosimilars in treatment naïve patients, my problem is with switching. How many studies do we have of the safety and efficacy for multiple switching? Zero. It may be fine, but we don’t know and I think we need more data,” he said.

Professor Fleischmann also questioned whether biosimilar registries would be able to provide the data to show equivalence between biosimilars.

His concerns were echoed by Australian rheumatologists in another session at the ARA conference on the impact of biologics in practice. 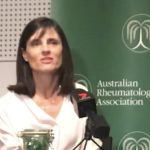 Associate Professor Susan Proudman, director of the Rheumatology Unit at the Royal Adelaide Hospital said she would have concerns about her patients switching between bio-original and biosimilars because of their differing immunological profiles, and the small but possible risk of lupus.

“Where the patient is already using an original drug we would make efforts to continue to prescribe that one and avoid  the switching that might occur inadvertently at the pharmacy by prescribing by brand name and encouraging our patients to keep the packaging or take a photo of it – just so we can keep track of which drug they have been getting,” she said.

But Professor Proudman said she could see a role for biosimilars in treatment naïve patients, particularly given the advantage of a Streamlined PBS authorisation process rather than the two-three week delay of a written authorisation for the PBS prescription of a bio-orginator.

“I think it will be an incentive. We’re always hoping for a more efficient process for obtaining these medications, and certainly being able to hand over the prescription there and then means you don’t need to rely on admin staff or nursing staff, or have patients ringing to ask where their script is. So I think that will encourage people to use biosimilars,” she said.