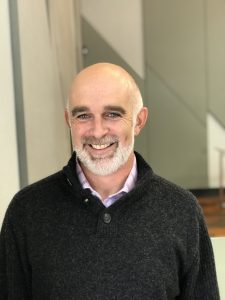 As he took over the ARA presidency from Professor Rachelle Buchbinder at the ARA conference in Melbourne, the limbic took a few minutes to catch up with Associate Professor David Nicholls to talk about the big issues facing the Association for his two-year presidency.

Build up a regional and rural workforce

One of our primary projects is looking at the results of our workforce survey. So this is how many rheumatologists we have, where they work, and how much work they do.

Because the government has a misconception – when they count up the number of rheumatologists in Australia and they do a rough calculation of the population they say we have enough of them. Their data doesn’t show how much patient care they deliver and where they deliver it. And we know there are a lot of rural and regional cities that have no rheumatologists and rely on a fly in fly out service.

So one of the big challenges that is going to occupy our time is trying to work out a strategy where we get rheumatologists into those communities where there is a need. And the only way we’re going to get that is by showing with good data there is a need and that it isn’t being met. And going to the relevant authorities – who are already interested, particularly because there is an election in 12 months time and there are rural and remote people who can swing an election. So the timing is good.

The second issue is to work closely with Arthritis Australia and their Arthritis Taskforce to deliver a policy for the whole of Australia for arthritis care. They have very kindly invited us to be part of that. As we are the key specialists who diagnose those people we are very happy to be involved with that project.

The other elephant in the room is continuing to work with the government to ensure that people get the right medication at the right time in their disease. There’s a group of people on biologics and the approval time for them has blown out to six weeks and for people in regional and remote areas it can be eight weeks.

That’s clearly not what anyone wants so we are going to be putting another approach to government to try and find ways to get people to stay on the drugs that work. This is about drugs that people are already on.

The prescriptions have to be hand approved, they have to go in the post. That process used to take a month and now it takes six weeks. And I’ve just heard today that in WA it can take as long as eight weeks. That means people are running out of medication. They can’t be carers, they can’t go to work, they can’t participate in life and this is completely unnecessary.

These are people who could have been on treatment for a decade and they have to build their life back up again. That’s a frustration but that’s part of our strategy, to make sure our patients get the best care they can. Just because you live rurally shouldn’t mean you get treated any less well.

We had a board session of all our special interest groups and study groups and found they all had a lot of common issues. The ARA board’s role is to facilitate those groups to keep doing the work that they do – we’re all volunteers. At the end of that two hours it was an amazing amount of collegiality within the different groups. We will also continue to work with groups such as the NPS MedicineWise and the MBS to try to ensure that money is spent wisely on interventions that make a bigger difference.

Professor Nicholls trained in New Zealand and the UK and has worked on the Sunshine Coast, Queensland since 2005. He is the owner and Director of Coast Joint Care and Co-Director of the Rheumatology Research Unit and is also Adjunct Associate Professor at the Clinical Trials Unit, University of the Sunshine Coast.