Satisfaction with specialist trainee programs appears to be improving, but only 39% of trainees are confident they will get a job when they graduate, an AMA survey shows.

The percentage of respondents who said they were happy with their career choice stayed largely the same at 87% compared to 88% in 2010.

However only 39% of respondents said they were confident they would obtain employment as a Fellow in their speciality when they graduated. In response to the question, which was not asked in the 2010 survey, a further 32% said they were ‘not sure’  about their employment prospects.

These results were consistent with anecdotal reports from trainee groups that graduating Fellows in some specialities were finding it increasingly difficult to secure public or private appointments after graduating, the report said.

“Failure to ensure there are sufficient employment opportunities for new Fellows will effectively shift the bottleneck in the medical training pipeline, from the beginning to its end.”

“Newly graduated Fellows who are forced to occupy senior registrar positions because of a lack of employment opportunities will block the training pipeline, and capacity for vocational training within the health system will be compromised,” it said.

Responsiveness to cases of bullying and harassment, feedback, appeals and remediation and the costs of training were all ongoing issues for trainees, the report showed.

Only 25% of respondents said the costs of their college training program offered value for money. And just 12% said they believed their college responded to bullying and harassment in a timely and appropriate manner. 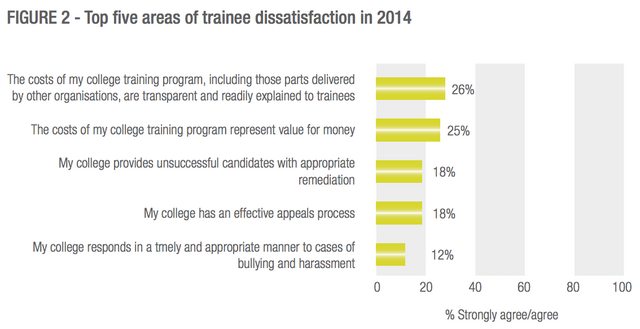 Hospital based specialist trainees and general practice registrars were survey in parallel in May 2014. GP registrars appeared to have a significantly more positive view of their training program than other specialities, the report said.