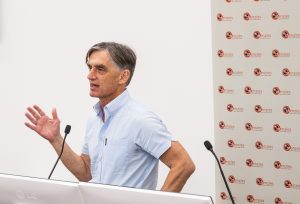 Professor Paul Torzillo has been awarded the Menzies Medallion in recognition of his contribution to improving the health of Aboriginal people across urban, rural and remote Australia.

The Menzies Medallion is the highest award offered by the Northern Territory’s Menzies School of Health Research.

Menzies Director Professor Alan Cass said Professor Torzillo has been a tireless campaigner for Aboriginal health in the NT and across Australia, and a key and active collaborator with Menzies.

“Professor Torzillo has maintained his involvement with Menzies for many years particularly working in research collaboration on ear disease, vaccines and respiratory disease, said Professor Cass.

“His work in Aboriginal health care delivery, research and advocacy has demonstrated how best-practice, evidence-based care can be delivered in both community and hospital settings.”

“He is someone who has generated evidence about what works, implemented it and effectively advocated for change in policy and practice. This has been a critical part of closing the gap between indigenous and non-indigenous health outcomes.”

Professor Torzillo is a Senior Respiratory and Intensive Care Physician at the Royal Prince Alfred Hospital in Sydney, and Medical Director of the Nganampa Health Council in South Australia.

His areas of interest range from the association between housing and Indigenous health to the use of extracorporeal membrane oxygenation (ECMO) as a bridge to lung transplant in cystic fibrosis.

He was also awarded an Order of Australia in 2005 for his contribution to Aboriginal Health.