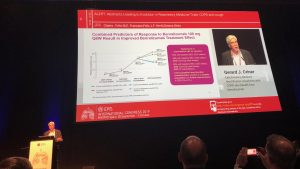 Despite the overall failure of benralizumab to impress in patients with moderate to severe COPD, it may be possible to identify a subpopulation of responders using a combination of elevated blood eosinophils and clinical characteristics.

Professor Gerard Criner, from Philadelphia’s Temple University, told the 2019 ERS Congress that the IL-5 receptor antagonist did not reduce exacerbations in the phase 3 GALATHEA and TERRANOVA trials despite baseline blood eosinophils ≥200 cells/uL.

However a pre-specified exploration of pooled data from the trials showed additional factors including three or more prior exacerbations in the previous year and postbronchodilator of FEV1 <40% predicted could help predict response to benralizumab.

This applied to patients in the intervention group receiving 100 mg benralizumab subcutaneously as an add-on treatment, initially every four weeks then every eight weeks, typically on top of triple (65%) or dual maintenance therapy (28%).

The study, also published in The Lancet Respiratory Medicine, found high eosinophils alone predicted a 12% reduction in exacerbations. That increased to 19% when patients on triple therapy were factored in, 30% with a history of three or more exacerbations and 35-41% when baseline lung function was also considered.

Meanwhile in asthma, researchers have attempted to identify the very best responders to two years of benralizumab.

A post hoc analysis comprised patients who were initially enrolled in either the SIROCCO or CALIMA trials and then transitioned into the BORA extension study.

Professor John Upham, from the University of Queensland and Diamantina Institute, told the Congress that mean data typically hides a wide degree of variability and there was a need to better understand people at the two extremes of response.

“It’s quite important to identify the characteristics of people who are most responsive to benralizumab because that is going to be important not only for understanding the mechanism of action and the pathogenesis but it’s also going to be important for guiding clinicians in making decisions about what treatment to use.”

He said the analysis showed that baseline predictors for being exacerbation-free over two years of treatment were relatively modest but included those with slightly better lung function, slightly lower BMI, and whose diagnosis had been made a slightly later stage.

“And possibly they were not quite so far down the natural history of the disease as there was less history of previous ICU admissions and a lower incidence of GERD,” he said.

“I think what this is saying is these monoclonal antibodies work better if you use them a little bit earlier in the disease rather than waiting until someone has had the disease for years and has lots of damage – by that stage it is getting a little bit harder to unravel things,” he told the limbic.

“The idea of treating people earlier is actually beneficial. In rheumatoid arthritis that is par for the course – they would very quickly start on biologics. I think that is possibly where it is going to move in asthma but we are not there yet.”