Follow-up is critical after discharge on bridging oxygen 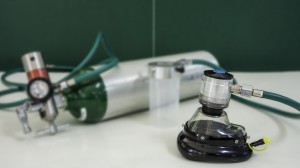 About half of respiratory patients discharged from hospital on bridging domiciliary oxygen will ultimately go on to require continuous long-term oxygen therapy (LTOT).

According to a retrospective study conducted at Alfred Health, the only reliable predictor of which patients will progress to LTOT was resting PaO2 just prior to discharge.

The analysis included 91 patients with baseline data at discharge and a clinic review 1-2 months post-discharge. On discharge, all had been prescribed continuous short-term oxygen therapy (STOT) for hypoxemia as per TSANZ guidelines.

At review, about half of the patients (47.3%) qualified for continuous LTOT. Others went on to either exertional or nocturnal oxygen, or a combination. Only six patients ceased oxygen therapy completely.

“The only statistically significant difference was resting PaO2 at time of hospital discharge, which was significantly lower in the LTOT-qualifiers (48.7 versus 51.6 mmHg),” the study authors said.

This particularly applied to patients with ILD versus COPD patients. However no underlying chronic disease or acute admission diagnosis could predict the need for LTOT after review.

Co-author Dr Kovi Levin, a respiratory physician at the Alfred Hospital, told the limbic that the heterogeneity of the cohort meant they were unable to identify a PaO2 cut-off point associated with LTOT.

“It really does highlight the need for patients not to get to lost to follow-up if they are prescribed oxygen at discharge because a large percentage of them ultimately no longer require or qualify for oxygen.”

“And we should probably also be careful when prescribing bridging oxygen that we do strictly follow the guidelines because there isn’t a lot of evidence these days for oxygen and we need to prescribe it with conformity.”

The researchers said while half of the cohort did not ultimately require LTOT, the 1-2 months of clinical stability was important.

“This does not mean that STOT is futile, as it may facilitate timely hospital discharges and provide the patients and carers with confidence after an acute illness,” the paper said.