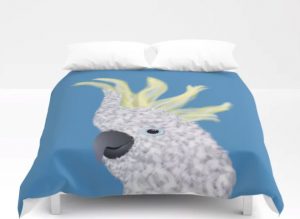 While the fall-out from fires not feathers are more likely to cause respiratory health problems in Australia in the next few months, BMJ Case Reports has highlighted a rare episode of ‘feather duvet lung’ in the UK.

The hypersensitivity pneumonitis (HP) was reported in a 43-year-old man referred to respiratory specialists in Scotland after three months of malaise, fatigue and increasing breathlessness.

A chest X-ray was initially reported as normal.

The non-smoking patient had no pet birds and was not a bird breeder or fancier however he had recently purchased a feather duvet and feather pillows.

Treatment was removal of the feather bedding and prednisolone 40 mg once daily for 1 month, reducing every two weeks (30, 20, 15 mg) to a maintenance dose of 10 mg once daily.

Symptoms improved quickly and were mirrored by improvements in lung function.

The authors of the case report said the patient was likely to have improved just with removal of the feather bedding.

They said similar delayed hypersensitivity reactions were probably easily missed or diagnosed late in the absence of meticulous history taking.

“Healthcare professionals should always ask about whether there is any exposure to feather bedding,” the report said.

“The onset of symptoms following exposure to new feather duvets or pillows is widely variable, ranging from 3 weeks to 5 years.”

“The best diagnostic clue is the correlation of symptoms with environmental exposure, given there are no highly specific symptoms or signs.”