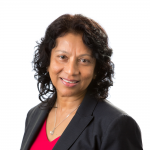 When Professor Shyamali Dharmage first started to see signals in a cohort she was studying that COPD might be more than an adult respiratory disease tied to smoking – that susceptibility to the debilitating condition could perhaps start early on in life – it signalled a turning point in COPD research.

Last week the respiratory epidemiologist was the joint winner (see details for Professor Alan James below) of the prestigious TSANZ Research Medal awarded each year in recognition of outstanding contributions to the advancement of knowledge in respiratory medicine or science.

Here she talks to the limbic about how our understanding of the origins of COPD has changed and reminisces about her early career research.

“Until very recently COPD came with a stigma as it was considered ‘just’ a smoker’s disease,” observes Professor Dharmage.

“It’s only in the last decade that people have realised there are multiple factors involved: occupation, air pollution, environmental factors. And as some studies suggest, including our own work, it could be that some people might already be on a path to COPD when they are born.”

It was 2008 and knowledge about early life origins of COPD was scarce at the time, she recalls.

“I was interested in paediatric respiratory diseases right from the beginning of my research career,” says Professor Dharmage who trained in medicine and public health in Sri Lanka before migrating to Australia with her young family in 1995.

It was at Monash University in Melbourne that Professor Dharmage took up a PhD in the epidemiology of adult asthma under the supervision of Professor Michael Abramson, who was running the Australian centre of the large international European Community Respiratory Health Survey (ECRHS) study.

After her PhD, she became co-chair of the Early Life Risk Factor working group within the ECRHS, on a nine-year prospective follow-up survey of more than 10,000 young adults. Professor Dharmage and international collaborators began looking at the impact of factors like parental asthma, childhood asthma, maternal smoking and the occurrence of severe respiratory infections before the age of five years – childhood disadvantage factors – on lung function and COPD.

That investigation would go on to reveal that having any one or more of these factors in childhood meant a considerable disadvantage with regard to adult lung function and COPD.  People with an increasing number of childhood disadvantage factors had an increasingly lower level of FEV1 in adult life; a slightly larger decline in FEV1 and the prevalence of COPD was substantially increased.

“It was very exciting for us – we couldn’t believe what we saw when we looked at the data. Childhood disadvantage was as common in the population as current smoking, and showed an equally large impact on lung function and COPD and a slightly smaller impact on lung function decline,” notes Professor Dharmage. And notably, the findings were similar in both men and women, smokers and non-smokers, in people who had never had asthma and in non-symptomatic subjects, and were consistent across the different geographical areas.

But the inherent problems that come with observational studies meant the findings did not garner much interest at the time.

“The issue was that ECRHS started when participants were between 20 and 44 years of age and we’d asked them to recall what happened during their childhood. Of course the potential for recall error meant that it was hard for us to say at that time there was a causal relationship.”

COPD as a chronic disease continuum

But in between completing her PhD in 2000 and publishing the ECRHS follow-up findings in 2010, Professor Dharmage moved to Melbourne University’s School of Population and Global Health where she began the process of setting up her own research program: the Allergy and Lung Health Unit, that includes two of the world’s key long term longitudinal studies in allergies, the Tasmanian Longitudinal Health Study and Melbourne Atopic Cohort Study (MACS).

“When I moved to Melbourne University to continue my research Murdoch Children’s Research Institute (MCRI) was close by and so I was collaborating with them a lot,” says Professor Dharmage, explaining that it was this exposure that expanded her view on respiratory disease.

“It was around this time when people started talking about the atopic march,” notes Professor Dhamage, referring to the pattern that sees progression of skin allergies to asthma and allergic rhinitis.

“I became interested in looking at the idea that COPD could be on a kind of allergy-centric chronic disease continuum – you develop eczema during infancy and then food allergy, that’s a risk factor for asthma and asthma is a risk factor for COPD in adult life.

So when I developed my research program I went in with the view that we have to investigate allergy and lung health together rather than in isolation – and that’s how I developed the Allergy and Lung Health Unit which I am now lead.”

The program has become recognised around the world for carrying out research into the genetic, molecular and environmental epidemiology of allergies, asthma and COPD and how to prevent them.

One of her first projects was to re-energise the Tasmanian Longitudinal Health Study – formerly the Tasmanian Asthma Health Survey (TAHS). The cohort study started in 1968 and surveyed all 8,500 children born in Tasmania in 1961 along with their parents and siblings through schools across the State. But subsequent follow up of the 45,900 participants had been restricted to selected groups by researchers who carried the TAHS baton with follow up stalled in the early 1990s by the time Professor Dharmage took over as the study’s Principle Investigator.

Describing her involvement with the study, that is now known for being the largest and longest running respiratory health research study, Professor Dharmage humbly says it was a case of being in the right place at the right time.

“TAHS was such a unique cohort – an amazing study – and while selective groups had been followed up over the years I wanted to go back to everyone, so I decided to re-establish the full family cohort.”

Together with Professor Haydn Walters and Professor Michael Abramson, Professor Dharmage attempted to trace 45,900 original participants through electoral databases, marriage registries and hospital databases. Some 70% of the cohort still resided in Tasmania with the rest distributed across other states throwing open the door for TAHS becoming a national collaborative project with a number of respiratory physicians becoming part of the TAHS team to help gather clinical data across ten laboratories around Australia.

The decision to re-establish the full original cohort led to a prolific amount of data – TAHS has now completed five follow ups involving parents and siblings and three follow ups of the 500 first index children who had lung function measures taken at the time.

“That’s really quite unique – we now have lung function data collected at six time points during TAHS participants’ lifetime from age seven to 53, and from that we’ve been able to develop lung function trajectories based on prospective data.”

According to Professor Dharmage COPD has three trajectories – it can be developed in early childhood, during adolescence or young adulthood. In fact some three-quarters of COPD cases that developed in TAHS participants by age 53 originated in poor lung function that began in childhood – issues such as asthma, bronchitis, pneumonia, allergic rhinitis eczema and exposure to second hand smoke.

The implication of course is that there could be a window of opportunity to overcome these early respiratory deficits, says Professor Dharmage. She sees the next stage of her research moving into the biological pathways of COPD.

“I want to really dig deep into this pre-COPD idea and see whether we can predict, using childhood data, who is going to develop COPD or poor lung function as an adult. We also want to look at biomarkers – the metabolomics the proteomics the genome wide association studies – to identify the biological pathways to understand the biology behind these trajectories and identify drug targets.”

Again Professor Dharmage says the TAHS cohort can contribute to those efforts.

“The uniqueness of this cohort is not just that we have collected survey data, clinical data including lung function and skin prick testing but we have also collected bloods which are stored in our bio bank. So using TAHS as well as other longitudinal cohorts, working across cohorts nationally and internationally, that’s what I’m doing to push this field forward.”

Professor Dharmage has begun trialling population-based interventions to investigate whether childhood allergies can be prevented – reducing not only childhood allergies but also subsequent chronic respiratory health problems by arresting the atopic march. One such current trial is focussing on prevention of eczema and other food allergies.

A champion of young researchers and particularly women in research, Professor Dharmage splits her time between running the Allergy and Lung Health program, which includes work on other acclaimed projects like HealthNuts, PEBBLES and VITALITY, mentoring PhD students and teaching epidemiology for Melbourne University’s Master’s program.

Reflecting on her own early research career Professor Dharmage acknowledges it wasn’t an easy path.

“When I migrated to Australia I came with a young family. My husband, a psychiatrist, and I both had to start from scratch with young children. I have struggled a lot since 1995 but it does get easier.”

Of her research medal, Professor Dharmage says the honour is huge.

“It’s not just me, it’s the whole Allergy and Lung Health Unit being acknowledged. I’m lucky to have these young, very bright scholars and fellows around me. The fact that my work is being recognised by the Research Medal means they are being recognised too.

In 2020, “due to the calibre of nominations” there are two joint recipients of the TSANZ Research Medal: Professor Shyamali Dharmage and Professor Alan James. The limbic will profile the joint recipient Professor James in the next newsletter.